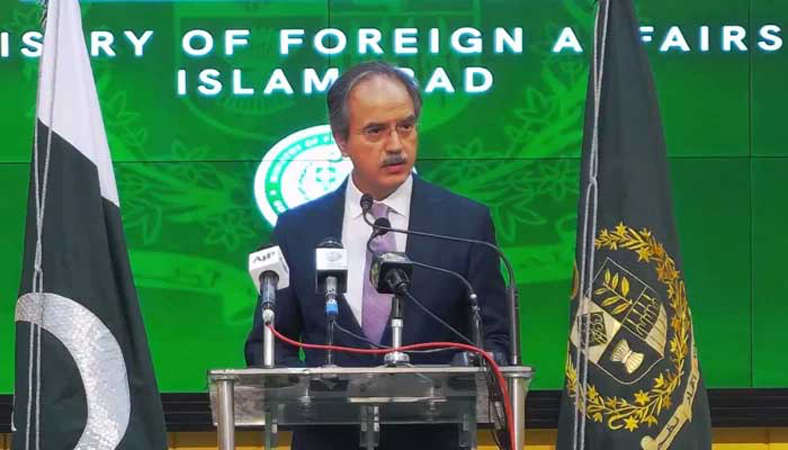 Islamabad on Wednesday reacted strongly to the draft bill introduced in the US Senate seeking sanctions against Pakistan along with the Afghan Taliban, terming references to the country, which remained the frontline state in the US-led campaign in Afghanistan, as “uncalled for”.

The FO spokesperson, Iftikhar Ahmad, issued a statement in response to media queries regarding Pakistan’s stance on the matter.

“We see that a debate is underway in Washington both in the media and on Capitol Hill to reflect on and examine the circumstances leading to the US withdrawal from Afghanistan. The draft legislation introduced in the US Senate by a group of Senate Republicans seems to be a reaction to this debate,” he said.

The spokesperson said that the legislation “includes references to Pakistan that are completely unwarranted”.

He said that Pakistan finds all such references “inconsistent with the spirit of Pakistan-US cooperation on Afghanistan since 2001, including facilitation of the Afghan peace process and during the recent evacuations of American and other nationals from Afghanistan”.

Ahmed stated for the record that Pakistan has consistently maintained that there is no military solution to the conflict in Afghanistan.

“Similarly, a coercive approach will not work and the only way to achieve long term sustainable peace in Afghanistan is through engagement and dialogue,” he added.

The spokesperson said that sustained security cooperation between Pakistan and the United States would “remain critical in dealing with any future terrorist threat in the region”.

“Such proposed legislative measures are, therefore, uncalled for and counterproductive.”

American senators have tabled a bill in the US Senate, demanding a deeper investigation into the Taliban’s victory in Afghanistan and sanctions on the group as well as those who assisted them in driving out the Ashraf Ghani-led regime.

The ‘Afghanistan Counterterrorism, Oversight, and Accountability Act’ seeks to establish a task force that will focus on continued evacuation of American citizens, legal permanent residents and Special Immigrant Visa holders from Afghanistan.

Introduced by 22 American Republican senators, the bill seeks to tackle issues related to the Afghan withdrawal, such as counterterrorism strategies and sanctioning the Taliban for alleged human rights abuses in the country.

“Not later than 180 days after the date of the enactment of this Act, and not less frequently than annually thereafter, the Secretary of State, in consultation with the Secretary of Defence and the Director of National Intelligence, shall submit to the appropriate congressional committees a report on entities providing support to the Taliban,” the bill read.

The bill further seeks a probe into support for the Taliban allegedly by non-state actors and the government of Pakistan into the Panjshir Valley operation by the group and against their military offensives targeting the Afghan resistance.

“A detailed description of United States diplomatic and military activities undertaken to curtail support for the 2021 offensive of the Taliban that toppled the Government of the Islamic Republic of Afghanistan,” it added.