Sindh go on top with resounding win over Balochistan 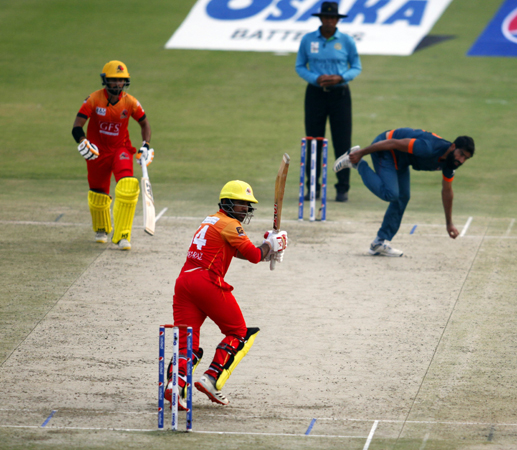 RAWALPINDI: An all-round effort took GFS Sindh to the top of the table as they thrashed Balochistan by 77 runs in the ninth match of the National Twenty20 Cup played at the Pindi Cricket Stadium, Rawalpindi on Wednesday evening. The victory was Sindh’s third in as many matches, they now have six points and are at the top of the six-team points table. Set a 176-run target, Balochistan were blown away by the Sindh bowling attack led by Shahnawaz Dahani, Zahid Mahmood and Danish Aziz who took nine wickets between them. Balochistan were bowled out for 98 in 16.4 overs. Fast bowler Shahnawaz took four wickets for 12 runs in 2.4 overs, leg-spinner Zahid took three for 18 in four and Danish took two for 23 in his four overs of left-arm-spin. Shahnawaz has now taken eight wickets in three matches and he is currently the joint-leading wicket-taker along with Khyber Pakhtunkhwa’s Shaheen Shah Afridi.

Balochistan openers Abdul Wahid Bangalzai and Imam-ul-Haq got the team off to a 46-run start. However, the chased fell away as soon as Imam was dismissed for 19 runs. Balochistan lost all ten wickets for an addition of 52 runs as their batters failed while attempting big shots. Abdul Wahid top-scored with 29 off 23 balls (five fours). Bismillah Khan with 12 runs was the only other batter to reach double figures as the whole team was bowled out with 20 balls to spare.

Earlier, Sindh captain Sarfaraz Ahmed won the toss and opted to bat first. The left-handed opening pair of Sharjeel Khan and Shan Masood provided the side a flying start of 52 runs in 6.2 overs. Sharjeel who hit three sixes and one four in a typically aggressive 34 off 20 balls fell to Umaid Asif. Khurram Manzoor was dismissed for 10 while Shan got run out a ball after hitting a big six, his 30-ball innings off 31 included three fours and one six.

Saud Shakeel contributed 32 off 24 balls (four fours). Saud added 55 runs for the fourth-wicket with Sarfaraz. Sarfaraz added 39 runs for the unbroken fifth-wicket alliance with Anwar Ali (22 off 13 balls). The wicketkeeper-batsman top-scored for his side with an unbeaten 41 off 25 balls that included three fours and a six off Umaid (last ball of the Sindh innings). Kashif Bhatti, Umaid and Khurram Shahzad took a wicket apiece for Balochistan.

Player of the match: Zahid Mahmood.