Syria high on agenda as Erdogan, Putin meet in Sochi 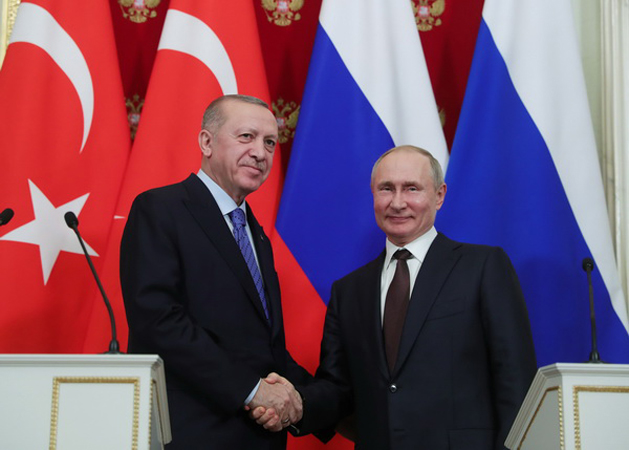 Wednesday’s meeting in Russia’s Black Sea resort of Sochi lasted for nearly three hours, marking the pair’s first in-person meeting for 18 months. Neither leader made any immediate statement after the discussions ended.

Russia and Turkey have historically had complex relations, balancing regional rivalries with finding common ground on economic and strategic interests.

In recent years, they have clashed over a number of issues, particularly Syria. Russia is the main ally of the Syrian government, while Turkey supports groups that have fought to unseat President Bashar al-Assad.

However, Russian and Turkish troops have cooperated in Idlib, the final holdout of rebel forces, after they brokered a ceasefire deal for the northwestern region last year.

The agreement halted a three-month Syrian government offensive that killed hundreds of civilians and displaced nearly one million people.

As he sat down with Erdogan on Wednesday, Putin pointed out that relations between the two countries continue to “develop positively”.

“Negotiations are sometimes difficult, but with a positive final result. Our [government] bodies have learned to find compromises that are beneficial to both sides,” he said. Erdogan echoed that sentiment and said he believed “there is great benefit in continuing our Turkish-Russian relations by strengthening them every day.”

He told Putin that “the steps we take together in relation to Syria are of great importance,” adding that peace in the country “depends on the relations between Turkey and Russia”. The ceasefire in Idlib has prevented another major military escalation in Syria, but rebel fighters say Russia has stepped up air raids in the region during the past week.

“We are abiding by the principles of the agreement reached with Russia,” Turkey’s Defence Minister Hulusi Akar told reporters prior to Wednesday’s meeting. “We expect the other side to also abide by their responsibilities under the agreement.”

Russia’s defence ministry said that work to implement an earlier deal on Syria was continuing, including joint patrols involving Russian military police. It said there had been heavy shelling by rebel fighters in the Idlib area.

Moscow says Russian forces are in Syria at the official invitation of al-Assad and that the presence of other forces is hindering his efforts to reunite and rebuild the country. Turkey has thousands of troops in northern Syria after it deployed land and air forces over its shared border in March last year in response to the Syrian government offensive. Turkey currently hosts 3.7 million Syrian refugees and Ankara fears that an escalation of violence in the country will lead to more people surging across its borders.

The Kremlin said that in addition to Syria, the two leaders would also discuss the situation in Afghanistan, other regional security issues and Ankara and Moscow’s burgeoning economic ties. Turkey and Russia have forged close cooperation in the fields of energy, tourism and defence despite their disagreements over Syria – as well as conflicts in Libya and Nagorno-Karabakh, where the two powers have also been on opposing sides.

NATO member Turkey bought Russian S-400 missile defence batteries in 2019, triggering the United States to impose sanctions against its defence industries and warnings from Washington of further action if it were to buy more Russian equipment.

Rachel Ellehaus, of the Eurasia Program at the Centre for Strategic and International Studies (CSIS), said the talks were an indication Erdogan was attempting to publicly “move closer to Russia” amid the tensions with Washington.

“But at the end of the day, I think this is more of a continuation of a marriage of convenience between Russia and Turkey in which they’re continuing to advance their short-term interests,” Ellehaus said, citing closer economic cooperation and the situation in Syria as examples.