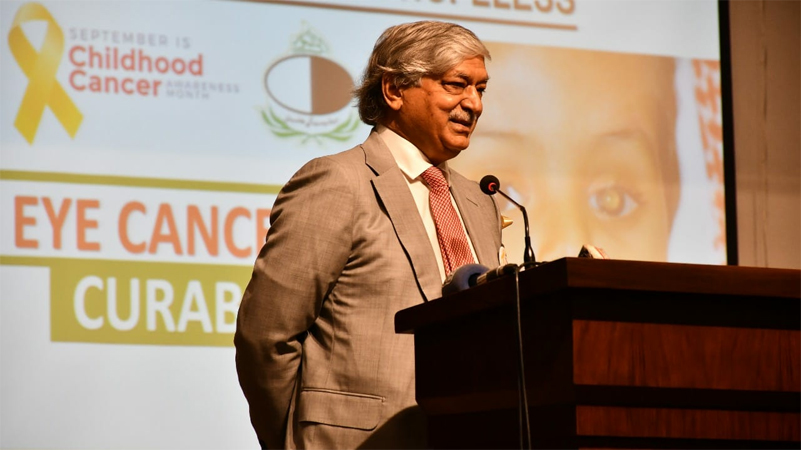 President of Al-Shifa Trust (AST) Major Gen (retd) Rehmat Khan on Wednesday announced plans to establish one of the most comprehensive centres for eye cancer in the country to combat the growing threat.

Apart from providing cancer surgical services, the nation’s first centre will offer all forms of cancer treatment through chemotherapy, radiation, rehabilitation and genetic counselling under one roof and all the expenditures will be paid by the trust, he said.”Al Shifa Trust’s motto is hope for the hopeless” he declared

He said that almost 30 per cent of eye cancer patients are children, which is a mounting threat that needs a proper response as they are the future.

Major Gen (retd) Rehmat Khan informed that annually almost 2,200 people are diagnosed with eye cancer, and the number is growing due to a lack of awareness.

He informed that the trust had established a cancer eye clinic to provide assistance to the needy which improved the situation, but it was not sufficient. Therefore, he said, a full-fledged centre has been planned to serve the masses. A space for this centre has been provided in newly built children eye hospital complex in Rawalpindi.

He said that timely detection can save sight as the problem gets complicated if treatment is delayed that may cause vision loss, loss of the eye or may prove fatal as patients are brought to hospitals only in the final stage.

In his speech, Prof Wajid Ali Khan emphasised: “We will need the support of all cancer stakeholders in making the plan successful as such a centre is badly needed as time is ticking away.”

Prof Tayyab Afghani highlighted the importance of early diagnosis and screening and called upon the national and international stakeholders to make a comprehensive national plan for the prevention and control of cancers.

He also demanded an appropriate mechanism for social protection and financial support for cancer patients and their families.

The seminar was also attended by a wide range of participants, including professionals, policymakers, public health consultants, patients, parents and officials from the Ministry of Health and the World Health Organisation.

It may be mentioned that Al-Shifa celebrated the month of September as childhood cancer awareness month like elsewhere in the world. Many activities were planned including regular streaming of public health messages on social media, children puppet shows and public awareness campaigns in the hospital.