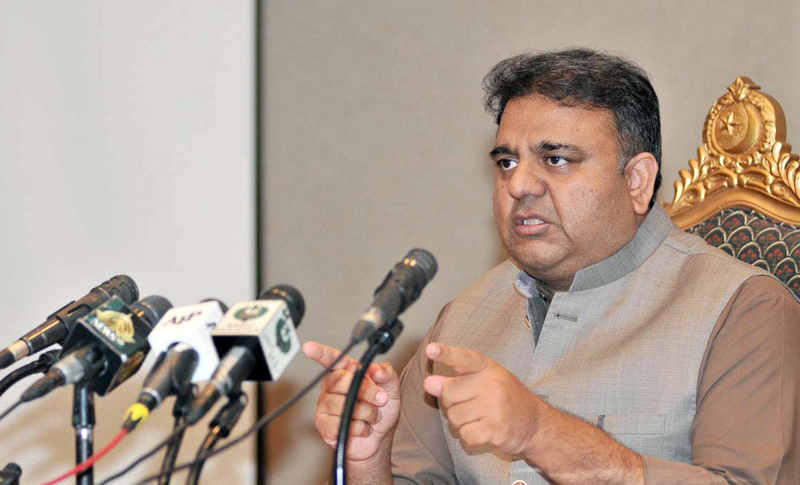 Minister for Information and Broadcasting Chaudhry Fawad Hussain on Tuesday announced action against those who were involved in corruption committed through the expensive road infrastructure projects executed during the previous tenure of Pakistan Muslim League-Nawaz (PML-N) government.

The decision to this effect was taken during the Federal Cabinet meeting which was chaired by Prime Minister Imran Khan, Fawad Hussain told the media persons here.

He said Minister for Communications and Postal Services Murad Saeed briefed the forum about the ‘hair-raising’ corruption scandal in the National Highway Authority (NHA) which executed road projects worth Rs1 trillion at the most expensive rates during the previous tenure of PML-N government (2013-2018).

Fawad said it had been observed that the rates on which the contracts for building road infrastructure were signed in 2013 was almost double than the agreements inked by the present government for the purpose.

He said the federal cabinet was told that the roads being constructed by the NHA today were almost Rs100 million per kilometer cheaper than the roads built during the PML-N previous tenure.

“It’s all happening despite the increase in price of all the material for road construction,” he added.

Murad Saeed apprised the forum about the plan being worked out to take action against those who were involved in this corruption, Fawad noted.

On the last weekend, both the ministers told the media about the massive corruption committed by the PML-N through motorway projects, besides sharing a comparative analysis of the expenses made by the Pakistan Tehreek-e-Insaf (PTI) government and the PML-N’s.

Fawad, on the occasion, also asserted that the Sharif family had purchased Avenfield flats in London after committing massive corruption in the Lahore-Islamabad Motorway (M-1) project.

Giving details of the federal cabinet meeting, he said the electoral reforms had become a routine agenda of the forum which started its proceeding with discussion on introduction of electronic voting machines (EVMs) and i-voting in the election.

There had not been a single sitting government in the past which put emphasis on the electoral reforms as being done by the PTI government which wanted to take this issue forward, he noted, adding it was the present one which had launched campaigns to highlight the importance of EVMs in curbing rigging in the polls for once and all.

The minister welcomed the initiation of dialogue between the treasury and opposition benches in the Parliament on the electoral reforms and said the government wanted them to move forward.

“The use of EVMs and i-voting in the polls is our top priority,” he said while describing the remittances sent by the overseas Pakistanis to the country as an important part of the national economy.

Explaining as to why the EVMs are crucial for electoral reforms, he said around 70 per cent disputes pertaining to the elections used to evolve during the time of vote count, adding the gadget would reduce that time to the minutes.

The minister also cited report of Justice Nasir-ul-Mulk led judicial commission on rigging to justify his claim that most of the polls related disputes occurred during the time of vote count.

Fawad expressed the hope that the dialogue initiated between the government and opposition would produce concrete result instead of a time consuming exercise. On the one hand, he said the government was ready to take its electoral reforms agenda in the joint session of the Parliament, while on the other, it was ready to consult the opposition on the matter.

The minister said the federal cabinet had decided in its one of the previous meetings that the people should be encouraged to build high-rise building by abolishing condition of the No Objection Certificate in those cities where the airports were operational. The initiative was aimed at discouraging haphazard expansion of the cities and creating the vertical ones, he added. During the today’s meeting, Fawad said it was noted that the initiative could not be implemented in true letter and spirit despite massive efforts of the government.

Replying to a question, he said that misreporting was being done on the case related to Sharifs’ assets, in London.

He said that Offcom had been approached and a case would also be filed in this regard.

The minister expressed the hope that proceedings of the case in accountability court against Shehbaz Sharif would be held on day to day basis and he would be awarded punishment soon.

Fawad Chaudhry said that PML-N President Shehbaz Sharif would be sentenced to at least 25 years in prison “if hearing of his corruption case is conducted on merit”.

He said that salaried class was feeling more impact of inflation whereas people affiliated with agriculture sector living in rural areas had received Rs1100 billion in that sector.

He said that the media workers were also feeling the pinch as the media house owners had not paid them their due salaries despite the government had issued Rs75 billion to them in past few months.