Historical gardens of Mughal era to become a tourist hotspot 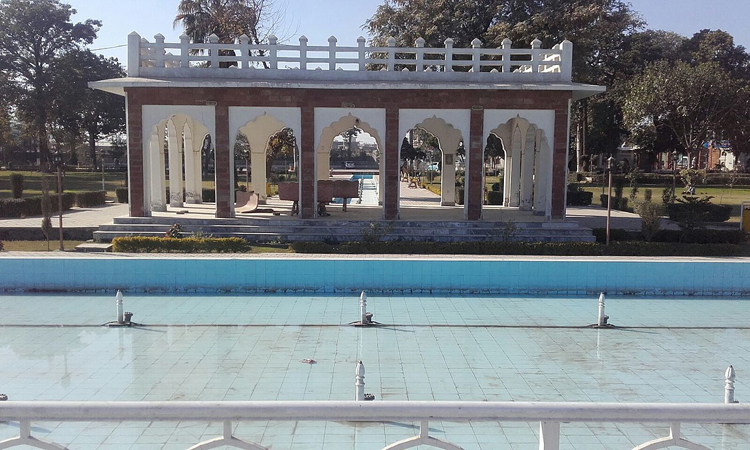 Kings Gardens, commonly known ‘Shahi Bagh’ constructed during the Mughal era in heart of Peshawar City is all set to regain its past glory and become the centre of attraction for tourists following completion of the ongoing massive repair and uplift works initiated under the ‘Peshawar Revival Plan’ to be completed by the end of this year.

Established by Mughals and later developed by Durrani rulers, Shahi Bagh located on backside of Firdus bazaar at Fiqarabad area on Peshawar-Charsadda Road is currently undergoing through massive development, restoration and face uplift works launched by the incumbent government in October last year to restore its grandeur and make it again a centre of attraction for domestic and foreign tourists besides providing better recreational facilities to Peshawarties.

Attracted kings, conquerors, monarchs, invaders and foreign tourists in the past, Shahi Bagh was a prime choice of the foreign dignitaries and diplomats as when they used to arrive Peshawar, it was a must to visit the bagh and spend some time under the tall trees in nerve-soothing environment. The first British envoy, Mountstuart Elphinstone had highly praised its natural beauty in his memoir ‘Kingdom of Caubul’ when he visited Peshawar in 1809.

Originally built on 800 kanal of land with lush green lawns, fountains and dense trees, Shahi Bagh was a unique and boundless source of joy and laughter for small kids while seeing colorful butterflies hovering over multi-color bunches of flowers in the South Asia’s oldest gardens where greenery had started fading due to improper up-keeping, encroachment and urbanization.

“When I was young I used to visit this historical park for exercise on its beautiful tracks snaking through its thickly grown canopy trees with people sitting around in sprawled lawns with children playing around them,” said Misal Khan, 80, a retired Information Officer while talking to APP.

“The chasing of butterflies, hide and seek of children among thickly grown trees and bunch of red roses used to be a big fun, especially for kids but all these charms wore-off due to encroachments made with times in forms of unplanned buildings, establishment of fun-lands and marriages halls, which had reduced green space in this historic gardens,” he said.

“The international traders, businessmen and merchants had also visited Shahi Bagh before departing to Central Asia, Afghanistan and the Subcontinent,” he recalled. “After nearly 35 years, I visited Shahi Bagh today. I am disappointed to miss the chirping birds, colorful butterflies and ladybirds due to vanishing of canopy trees and flowers here due to negligence and massive encroachment,” he added. However, he expressed satisfaction over the ongoing uplift works at Shahi Bagh, especially maintenance of its lawns, fountains and construction of Ladies Parks on 83 kanals. “Shahi Bagh is the identity of Peshawar and it must be preserved without compromising on its originality and all encroachment on its premises should be immediately removed to restore its original grandeur,” he said.

Shahi Bagh has witnessed first uplift work when the Awami National Party-led coalition government had started its face-uplift and beautification in 2009. Later, on October 3, 2012, Peshawar High Court (PHC) had ordered the KP Government to remove all illegally built structures in premises of Shahi Bagh with the observation that it was a protected monument and its original area should be recovered. Later, the court also ordered the secretaries concerned to submit an inclusive revival plan for Shahi Bagh.

Accepting the challenge, the incumbent Government had launched an ambitious Peshawar Revival Plan for uplift of provincial capital including restoration and face uplift of Shahi Bagh and constituted a committee of experts from various sections of the society for effective implementation of the project on ground. Engineer Muhammad Riaz of the Local Government and Rural Development Department, who is supervising the entire uplift work on Shahi Bagh said that massive repair and renovation work was launched at Shahi Bagh in October last year. In the first phase, he said, all encroachments were removed from the historical gardens and expressed the hope to complete the entire uplift works by the end of this year.

He informed that 121.75 kanal encroached lands of Shahi Bagh have been reclaimed following PHC’s orders. The reclaimed lands includes 24 kanals of the Pardah Bagh and a wedding hall, 34.75 kanal land of the Funland and 63 kanal used by Traffic Police for parking of impounded vehicles, he said, adding the total area of Shahi Bagh has now increased to 205 kanals.

Out of 121.7 kanal of reclaimed land, he said, 39.75 kanal was included in Shahi Bagh and 83 kanal were allocated for developing a state-of the art Ladies Park. The ladies’ park would be constructed with an estimated cost of Rs 179 million with all modern facilities including indoor and outdoor gyms, jogging tracks and separate playing area for children.