Transboundary pollution of the river Okhchuchay by Armenia

Brief information about the river Okhchuchay
Okhchuchay is the left tributary of the Araz river (83 km long, the catchment area is 1,175 km2), originating from Gapijig mountain (3285 m) of Zangazur range. The larger part is located within the Syunik region of Armenia. The lower course of the river flows through Zangilan (recently liberated territory from the Armenian occupation) and enters Araz river.
Its flow is formed by snow (46%), rain (10%) and groundwaters (44%). The average annual water flow is 10.0 m3/sec, the average annual volume is 315 million m3.
40% of the annual flow is formed during the spring period, 43% in summer, 10% in autumn, 7% in winter season. 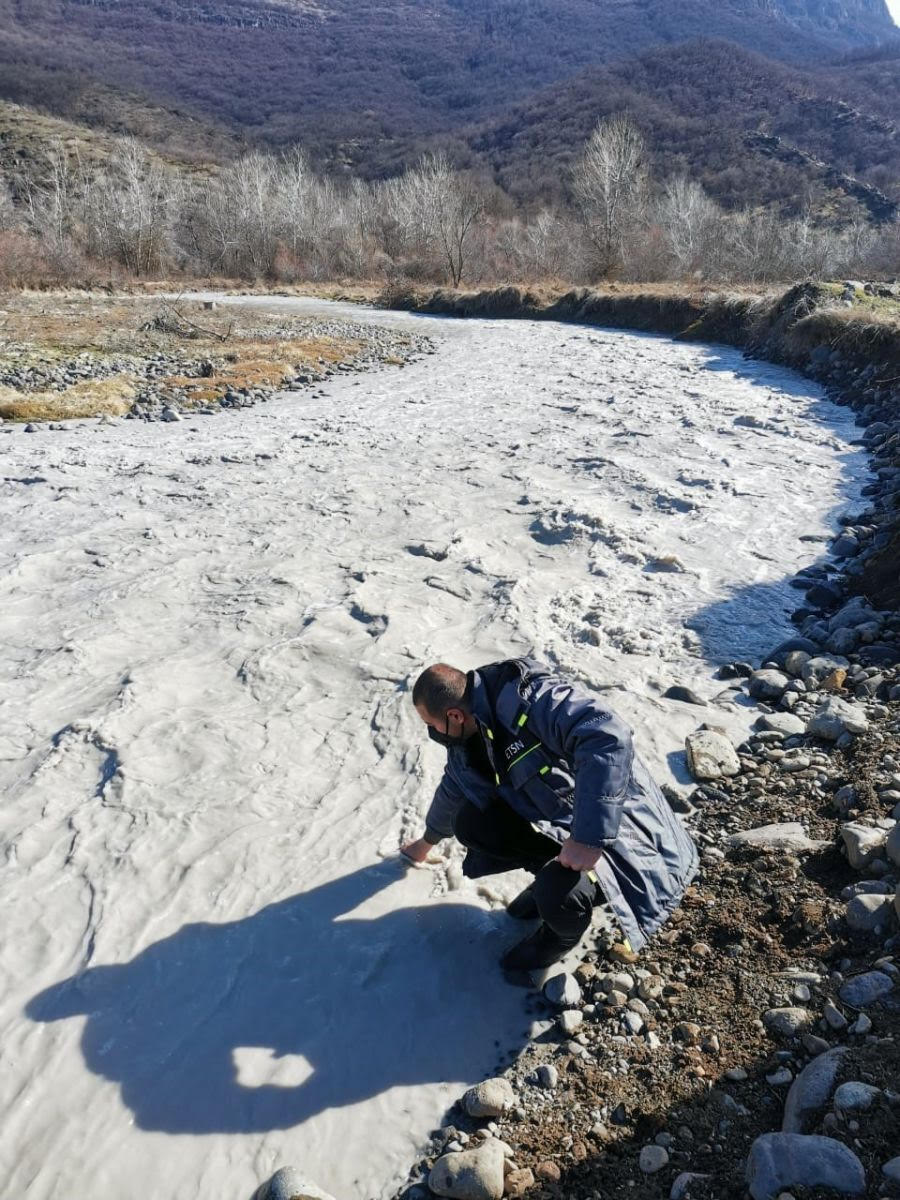 Transboundary pollution
In Azerbaijan about 70% of the country surface water resources are heavily dependent on the external inflow from neighboring countries.
The main part of the transboundary river – Okhchuchay flows through the territory of Armenia. The lower stream of Okhchuchay flows through the territory of Azerbaijan and enters Araz river, the second largest water course in the South Caucasus. The Araz river is also a transboundary river with Armenia that joins the Kura – the largest river watercourse in the region. Both rivers play a key role in providing drinking water, as well as irrigation of the whole country.
Pollution of the Okhchuchay has a direct negative impact on the quality of both Araz and Kura rivers.

Main sources of transboundary impact:
Okhchuchay is heavily polluted by mining waste of Gafan and Gajaran mines located on the territory fo Armenia. The river is almost used as a collector of mining waste of these industrial facilities. Contamination of Okhchuchay with heavy metals and salts takes place due to wastewater generated from mining and processing enterprises and discharged directly into the river basin. The location of the largest mining enterprises in Armenia – Gajaran Copper-Molybdenum Plant in Armenia (Zangazur Copper- Molybdenum Plant) and Gafan Ore Processing Plant in Syunik region, at the source of the Okhchuchay River (called Vogji River in Armenia) confirms the fact of pollution namely from these sources.

Environmental concerns:
Continuing intensive pollution and negative impacts to Okhchuchay may have detrimental and irreversible effects on to the nature of the region and its people.
Drastic changes in the quality of water in the river can have extremely negative effects on its use for domestic and agricultural purposes.
Especially, frequent pollution and negative changes in quantity and quality may result in unique river ecosystem degradation – reduction and disappearance of rare and endangered species. Pollution may also lead to serious food safety problems.
Using of contaminated water can lead to detrimental consequences – disorders of gastrointestinal tracts, destructive processes in kidneys, bones, disorders of cardiovascular and nervous systems of the human body.
Monitoring results:

The liberation of the Azerbaijani lands previously occupied by Armenia has given an access for the Azerbaijani ecologists to local rivers flowing through the territories of the Zangilan district and they conducted monitorings in Okhchuchay river, including other transboundary rivers.
River pollution was confirmed by monitoring. The monitoring results were analyzed in national laboratories, including internationally accredited and certified foreign laboratories.
According to the analysis of water test samples taken from Oxchuchay in January-June 2021, Ministry of Ecology and Natural Resources of the Republic of the Republic of Azerbaijan reported that high amounts of heavy metals, especially copper, molybdenum, manganese, iron, zinc and chromium were found in the river water. Observations revealed the water color has drastically changed from time to time due to pollution from white to acidic-yellow color.

Unfortunately, Armenia – from where the majority of rivers flow into the territories of Azerbaijan – has not yet joined the Helsinki Convention on Transboundary Watercourses. This international document adopted in 1992 in Helsinki (Finland) serves as a mechanism for strengthening the national measures and international cooperation aimed at achieving the environmentally sound management and protection of the transboundary surface and ground waters.

MENR addressed international organizations to share its concern on the environmental hazards and critical situation of the river Okhchuchay. International organizations were informed about facts of pollution and called upon to take urgent measures to prevent irrevocable degradation of region’s unique ecosystem. But the mentioned requests remained unanswered till today.
Azerbaijan calls upon international community and environment activists around the world to consolidate efforts for bringing an end to the pollution.