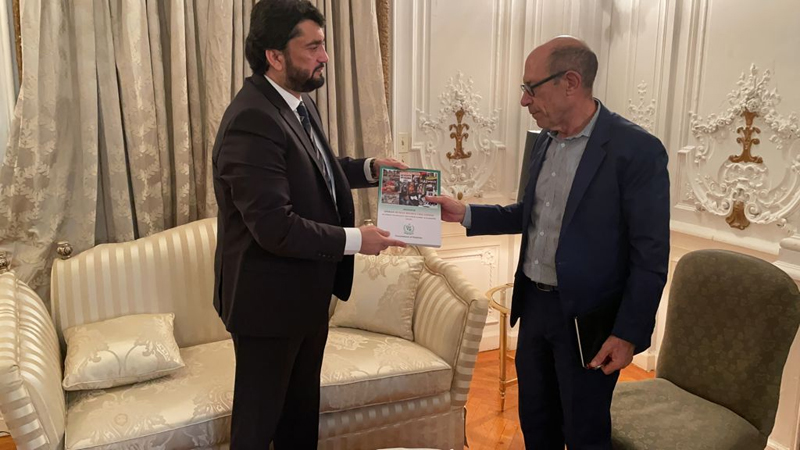 Chairman of the Parliamentary Committee on Kashmir Shehryar Afridi has presented a dossier to the Amnesty International (AI) on human rights violations in Indian Illegally Occupied Jammu and Kashmir (IIOJK) and urged the Amnesty International to raise its voice and ask the United Nations and other humanitarian organisations to save the suffering Kashmiris from Indian genocide.

Afridi who met Lawrence Moss, Senior Advocate at Amnesty International (AI) at the United Nations on the margins of the 76th session of the UN General Assembly (UNGA) in New York and briefed him on the worsening human rights violations in the Illegally Indian Occupied Jammu and Kashmir (IIOJK).

During the 90-minute meeting, Afridi detailed how the occupational regime of Indian in Jammu and Kashmir was involved in war crimes and crimes against humanity. He also briefed Mr Moss on the muzzling of civil society voices in India, including its refusal to allow Amnesty International and other independent observers to operate in the country particularly in IIOJK which he said was a matter of deep concern.

“I underlined that India has imposed an ‘iron curtain’ on IIOJK since Aug 5, 2019 and was relentlessly pursuing its nefarious design to introduce demographic changes in the occupied territory,” he said.

He said he had invited Amnesty International to have a more in depth and detailed interaction with members of the Special Parliamentary Committee on Kashmir in future. “As the chairman of the Parliamentary Special Committee on Kashmir, I have come to take part in the ongoing General Assembly session for a very special purpose. My mission here is to sensitize the international community, as well as the civil society, on the grave and systematic human rights violations taking place in IIOJK,” Afridi said. “Since August 5, 2019, there is a wall of secrecy, a military siege and communication blockade imposed on IIOJK. Behind this iron curtain, crimes against humanity are being committed in IIOJK, not just human rights violations. These include mass killings, blindings, rape, illegal detention of thousands of political activists, torture and degrading treatment,” he said. “Our outreach to the European Parliament, UK House of Commons, even US Congress and ASEAN parliaments has been successful,” said Afridi.

Shehryar Afridi said that due to selectivity and double standards, human rights have been reduced to instruments of strategic and foreign policy. “Recently, a debate on Kashmir was held in UK House of Commons in which speaker after speaker emphasised to put an end to the oppression, genocide and war crimes in Kashmir. But would 10 Downing Street listen to them,” argued Afridi. “If India has nothing to hide why is not giving access to HRW, Amnesty International and Physicians for Human Rights in the occupied so that they could make an independent assessment of the situation there. The Office of High Commissioner and Human Rights Council have been denied entry,” he said.

Afridi said that to further its plans, over 4.2 million fake domicile certificates have been issued already under the so-called “Jammu and Kashmir Grant of Domicile Certificate (Procedure) Rules, 2020” with an objective to change the demography of the occupied territory.

“The most recent example of Indian barbarity was the treatment of mortal remains of the great Kashmiri leader Syed Ali Shah Geelani. His body was forcibly snatched by the Indian army and his family was denied the right of a proper funeral and burial. The Government of India was so afraid of Syed Geelani and what he stood for that they resorted to this inhumane act even after his passing away,” he concluded.