* Peng Zhengwu says no matter how the int’l landscape changes, China and Pakistan have always joined hands to forge ahead 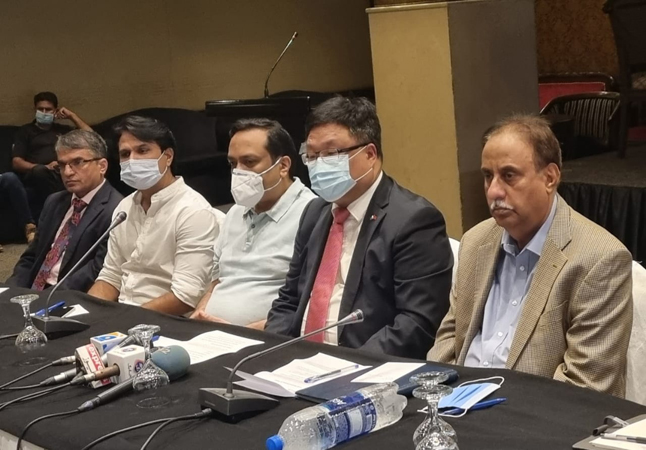 On celebrating 72nd anniversary of the founding of the People’s Republic of China known as China National Day set to be marked on October 1, China’s Acting Consul General Lahore Peng Zhengwu has said that keeping in view daunting challenges to world especially Cold War thinking, Covid-19, rising unilateralism, there is an urgent need for human society to seek out a new philosophy and make the international system and order fairer and more reasonable.

He said that over the past 72 years weathering all odds and getting over multiple crisis, China has witnessed profound and transformative change and it is the Communist Party of China (CCP) that has made this change possible.

He expressed these views on a seminar titled the 72nd anniversary of the founding of the People’s Republic of China and President Xi’s governance” organised by Institute of International Relations and Media Research (IIRMR) in Lahore. Chinese diplomats, scholars, academicians, analysts and others attended the seminar.

Peng said that CCP has led the Chinese people to win a complete victory in eradicating absolute poverty. It has raised China’s per capita GDP from less than US$200 at the start of the reform and opening-up to today over US$10,000. “China has met the poverty eradication target set in the United Nations 2030 Agenda for sustainable development 10 years ahead of schedule, and according to the World Bank’s international poverty line, the number of Chinese people lifted out of poverty over the past 40 years accounts for more than 70 percent of the global total,” he added.

Citing President Xi Jinping visit to Pakistan in 2015 when he addressed at National Assembly Pakistan, saying whenever Pakistan needs help, China will always support Pakistan, Peng heralded that China will continue to propel the CPEC forward and termed 10th JCC as precursor of good fortune. Since 70 years of China-Pak diplomatic relations, he said that no matter how the international landscape changes, China and Pakistan have always joined hands to forge ahead. He said that President Xi’s governance not only contributes to China’s development, but also brings benefits to the world. “President Xi put forward a concept — building a global community of shared future since 2012,” he added.

IIRMR Chairman Muhammad Mehdi has dubbed CPEC as a golden opportunity that should never be missed, saying it is pity that using selected propagandists, those who are at the helm of affairs are demonising CPEC power projects installed during previous regime just to quench the thirst of their political vendetta. Interdependency of business and energy is way forward to stamp out poverty, he added. “Chinese President Xi Jinping put into play both factors successfully and uplifted more than 770 million people out of poverty 10 years before UN poverty eradication target 2030. Pakistan can also do the wonder provided China strategy is studied and practiced,” he explained. IIRMR President Yasir Habib Khan said that 72 years of China National Day is a name of journey that unite leadership and people in one fold, breaking new grounds for sustainable successes. Seeking inspiration to Chines spirit, he said that Pakistan leadership must meet public demands, otherwise, misfortunes may spiral out of control.

PU Dean Faculty of Law Professor Dr Aman Ullah praised China for investing in its human resource seriously with sustainable economic policies. While PU Ex head of Deptt Economic Dr Qais Alam snubbed qualms that China wants hegemony or a Cold War with the West. He asserted, “Instead of blaming America as ungrateful, we should keep a balance between China and the West, working with both powers for common human destiny.”

Forman Christian College University (Department of Economics) Assistant Professor, Dr.Salah Ud Din Ayubi, said the prospects of this Pak-China bilateral relationship depends on growing connectivity between the leadership, businesses and peoples in the two countries in the years to come.