Pakistan hits back at India

* At UNGA, Pakistani delegate says Jammu and Kashmir neither is 'integral' part of India, nor is it India's internal matter
* India's use of the canard of terrorism, regurgitating stale arguments are typical of all occupiersa 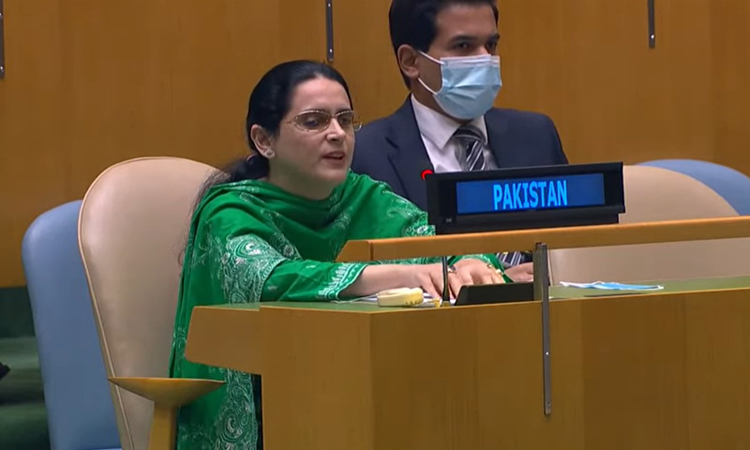 Pakistan has firmly rejected India’s claim at the United Nations that Jammu and Kashmir was its ‘integral part’, saying that the Himalayan state was an internationally recognised disputed territory.

“Jammu and Kashmir neither is a so-called ‘integral’ part of India, nor is it India’s internal matter,” Pakistani delegate Saima Saleem said in response to an Indian delegate’s assertion that by raising the Kashmir dispute in his speech to the UN General Assembly on Friday, Prime Minister Imran Khan had brought in “matters internal to my country”.

Reacting to the Indian claim, Saima, a counsellor at the Pakistan Mission to the UN, said: “India remains in occupation of an internationally recognised disputed territory whose final disposition needs to be decided in accordance with the democratic principle of a free and impartial plebiscite under UN auspices, as provided for under numerous resolutions of the Security Council.”

The Indian delegate, Sneha Dubey, while exercising her right of reply to PM Imran’s statement, also made sweeping allegations about Pakistan’s involvement in terrorism, claiming that the “country has a policy of harbouring, aiding and actively supporting terrorists.”

In a hard-hitting statement made in exercise of her right of reply, Saima, Pakistan’s visually-challenged diplomat, said that India’s use of the canard of terrorism, regurgitating stale arguments are typical of all occupiers.

“Let me emphasise that India itself is the principal perpetrator, sponsor, financier and abettor of terrorism in the region,” she said, adding New Delhi was involved in at least four different types of terrorism:

* Resorting to “state terrorism” to suppress the people of Indian Illegally Occupied in Jammu and Kashmir (IIOJK).

* Funding and supporting terrorist organisations like the TTP which conducts numerous cross-border terrorist attacks against Pakistan.

* Financing and organising mercenary terrorist organisations against Pakistan to impede economic growth and prosperity of the region, citing the capture of Indian spy Kulbhushan Jadhav.

* Its supremacist ideology has mainstreamed Islamophobia and bigotry against minorities, particularly Muslims.

India’s violations of human rights in occupied Jammu and Kashmir, Saima said, were well documented in the two reports of the UN High Commissioner on Human Rights, as also by major human rights organisations, but Indian authorities have failed to respond to their critical reports.

The government of Pakistan, she said, has recently released a comprehensive and well-researched dossier containing the entire range of gross, systematic and widespread violations of human rights being perpetrated by Indian security forces in the occupied territory.

“We call upon the international community to take cognisance of the compelling evidence and hold India accountable for the heinous crimes. “If India has nothing to hide, it must accept a UN Commission of Inquiry and agree to implement the Security Council resolutions stipulating a plebiscite to enable the people of Jammu and Kashmir to exercise their right to self-determination,” the Pakistani delegate added.

“The Indian delegation would do well to reflect on the deeply troubling trajectory their state is embarked upon, rather than indulging in patent falsehoods about Pakistan,” she remarked.