FM calls for ‘urgent action’ on humanitarian crisis in Afghanistan 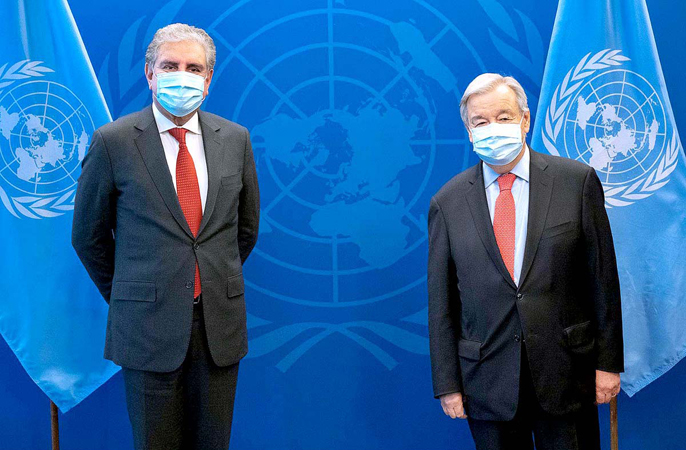 Foreign Minister Shah Mahmood Qureshi in a meeting with UN Secretary General Antonio Guterres on Friday called for an “urgent action” to address the humanitarian crisis in Afghanistan.

According to a statement issued by the Foreign Office, “Qureshi underscored the need for urgent action to address the prevailing dire humanitarian situation in [the] country, calling for the continued political and economic engagement of the international community to end [the] decades-long conflict.” Additionally, Qureshi also mentioned Pakistan’s role in addressing the situation.

Moreover, the foreign minister commented on the Kashmir issue and hoped that the UN would address the situation in Kashmir.

Qureshi presented a dossier to the UN secretary general in New York containing details of the gross, systematic and widespread human rights violations in Indian Illegally Occupied Jammu and Kashmir.

Apprising the UN chief of the dire situation in IIOJK, the foreign minister said the unilateral Indian measures taken in the disputed territory are a threat to regional and international peace and security, it said.

He emphasised that reforms must be decided by consensus and member states must be allowed the necessary time and space to evolve a solution acceptable to the entire UN membership, the statement said.

Qureshi also called for the need for stemming the rising tide of Islamophobia, ending vaccine inequity, and ensuring adequate financing for developing countries to respond to the pandemic and the resulting economic crisis.

In a tweet, Qureshi summarised his meeting, saying: “Great to meet Antonio Guterres at UNGA and share Pakistan’s key priorities: equitable socio-economic development, stabilisation of Afghanistan and just resolution of Jammu and Kashmir dispute. We look to the UN to play a central role in addressing and overcoming these challenges.”

The foreign minister’s meetings coincided with Prime Minister Imran Khan’s address at the UNGA, which outlined the same issues raised by Qureshi in his meeting with Guterres.

In his address, the prime minister made a strong pitch for the world to rally behind Afghanistan’s Taliban government for preserving the progress made by the war-ravaged country over the past two decades and preventing it from turning into a safe haven for terrorists.

“There is only one way to go. We must strengthen and stabilise the current government, for the sake of the people of Afghanistan,” he said, warning that taking a course contrary to this would further destabilise the war-torn country and turn it into a terrorists’ haven.

Speaking at a press conference with Pakistani media representatives, Qureshi recapped the speech by PM Imran at the UNGA and his various meetings with officials over the past few days.

He also said PM Khan had exposed Indian propaganda about Jammu and Kashmir and brought home to member states the real state of affairs in the disputed territory.