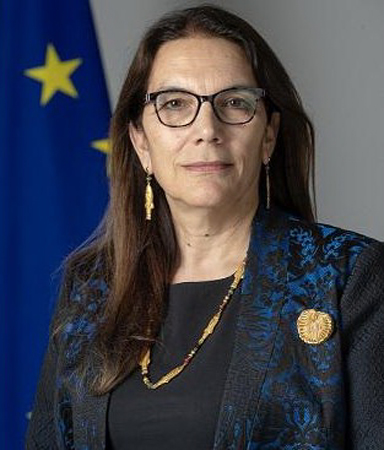 European Union (EU) Ambassador to Pakistan Androulla Kaminara has recognised the critical role of Pakistan in bringing peace in Afghanistan and safe evacuation of its nationals from there. In an interview with Radio Pakistan, she said over the last few weeks, there had been several meetings between representatives of the EU and individual members of EU states with Pakistani authorities mainly on the situation arising out of Afghanistan.

She appreciated Pakistan’s stance that the government in Kabul must be inclusive and women should also be given representation.

The EU ambassador said the bloc had been following the regional developments very closely after the take-over of Kabul by the Taliban, adding the EU was interested in respect of human rights, an inclusive government in Afghanistan and evacuation of EU citizens and Afghan nationals, who wanted to leave the country. Androulla Kaminara said the EU had provided 57 million Euros in aid to Afghanistan since the beginning of this year. Besides, the bloc had announced to quadruple this amount, and in the last week additional one hundred million Euros were announced for the war-ravaged country.

“We will continue to provide aid to Afghanistan to avert any humanitarian crisis in that country,” the envoy said. However, she ruled out the possibility of recognition of the Taliban government by the EU at this stage.

On the issue of Indian Illegally Occupied Jammu and Kashmir (IIOJK), Androulla Kaminara said the EU had always maintained that human rights had to be adhered to and respected, adding it had been encouraging both sides to continue efforts to bilaterally solve the issue. The ambassador said the EU was very encouraged to see that there were very few violations on the Line of Control as compared to previous years. It was an encouraging sign that could lead to more understanding from both sides to potentially resolve the conflict; she said adding “we are against the violations of human rights anywhere.

Commenting on existing bilateral relations with Pakistan, she said ties with Pakistan were multifaceted and “we are working on a number of issues.” She said on the international level the EU was working with Islamabad on climate change and promoting relevant decisions at the UN system. Within the country, she said, the EU worked on issues of trade and business among others. Androulla Kaminara said the EU was the number one destination of Pakistani goods due to GSP Plus status accorded to Islamabad, adding during 2019, Pakistan exported goods worth 7.5 billion Euros to EU markets.

She said the EU had been supporting Pakistan’s Small and Media Enterprises (SMEs) sector to facilitate them in increasing their share of exports. “We have recently set up EU Pakistan Business Forum for SMEs to help them interact with their counterparts in Europe,” she added.

Explaining the scheme, Androulla Kaminara said through the GSP Plus status, Pakistan had been able to export goods to the EU since 2014. The country received zero import duties for its products in the EU.

She said as part of the GSP Plus status the country had to adhere to reforms to 27 UN conventions, adding Pakistan was a signatory to many of these conventions. “We are collecting information and the next review of GSP Plus status is expected by the end of the year.”

Androulla Kaminara said the EU had a strong cooperation with Pakistan on election issues and it sent Election Observers during the last three elections, following which some suggestions of the observers had been carried out by Pakistan but still things were pending.

She said the EU had also been cooperating with Pakistan on other projects and it signed a 40 million euro programme for water management in Balochistan. The project aims at stopping water wastage in the province.

Androulla Kaminara said after the signing of the Strategic Engagement Plan between the EU and Pakistan, new areas like cultural exchanges, education, information technology and knowledge exchange had been incorporated into it. The ambassador said EU and Pakistan were also working closely on several projects in the domain of counter-terrorism, and “we provide training to Pakistani security personnel besides providing them equipment.” She said the European bloc also provided Pakistan development cooperation aid comprising grants to address issues of poverty, natural disasters and other areas of concern.