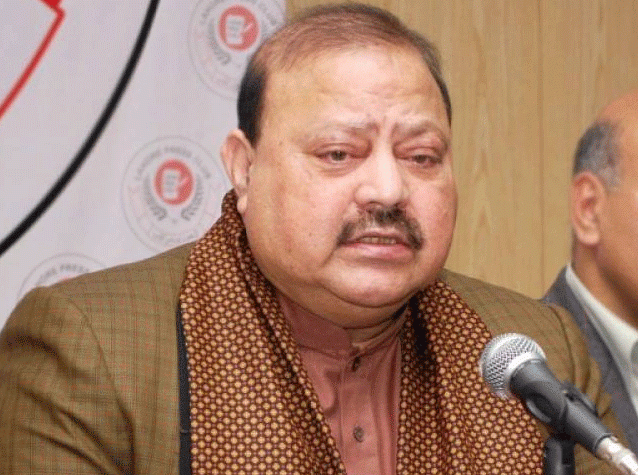 NEW YORK: The Azad Jammu and Kashmir President, Barrister Sultan Mehmood Chaudhry, lauded the Organization of Islamic Cooperation’s “continued, unequivocal support” for the right to self-determination of the Kashmiri people when he met with OIC’s Permanent Observer to the UN, Ambassador Agshin Mehdiyev, in New York on Friday.

According to a press release, the president noted that the recent adoption of the Joint Communique at the ministerial level meeting of the OIC Contact Group on Jammu & Kashmir on the sidelines of the 76th session of UNGA, was yet another manifestation of the 57-member organization of longstanding support to the Kashmir cause.

Chaudhry said he had come to New York to apprise the international community about the continued atrocities and gross human rights violations committed by over 900,000 Indian troops deployed in the Indian Illegally Occupied Jammu and Kashmir (IIOJK). The President said that the situation in the occupied territory has acutely deteriorated since the illegal Indian decision of August 5, 2019, which eliminated the statehood status of the occupied territory.

Since then, he noted that India has imprisoned the entire Kashmiri leadership, illegally detained thousands of Kashmiri youth, including women and children, summarily executed young boys, put down protests violently, and burnt down entire neighborhoods and villages. The President underlined that India is carrying out a systematic and carefully crafted ‘settler colonial’ project in IIOJK, highlighting that the Indian Government has already issued over 4.2 million fake domicile certificates to non-Kashmiris with the aim to change the demography of the occupied territory.

During the meeting, President AJ&K also mentioned the barbaric treatment meted out to the mortal remains of the great Kashmiri leader Syed Ali Shah Geelani, whose body was forcibly snatched and his family denied the right of a proper burial by the Indian occupation forces. The President said that in the face of all these atrocities, continued support by the OIC is critical to keeping the sense of hope alive among the oppressed people of IIOJK.

The Permanent Observer reaffirmed OIC’s principled position on the Jammu and Kashmir dispute, according to the press release. He reiterated the OIC’s complete solidarity with the people of IIOJK and assured the President that the OIC would continue with its steadfast support and commitment to the Kashmiri brethren.