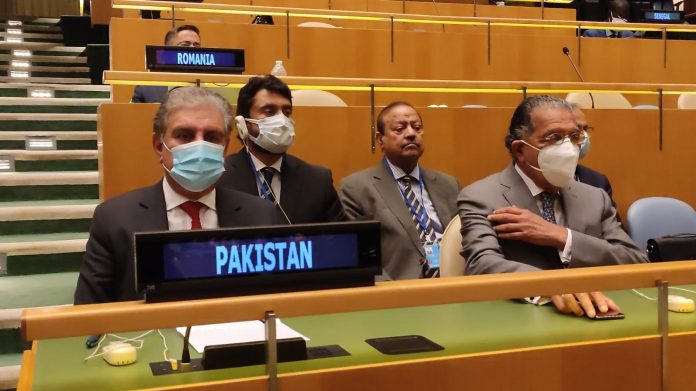 Speaking at a “High-Level Dialogue on Energy 2021”, convened by the UN Secretary-General to build a global road-map towards the achievement of SDG No. 7 by 2030 and net zero emissions by 2050, Foreign Minister Shah Mahmood Qureshi said Pakistan attaches high priority to the achievement of the SDG 7. Pakistan’s policy objectives, he told the meeting, centered on universal access to energy, doubling the share of renewable energy, and doubling the rate of energy efficiency.

The foreign minister emphasised that the solar and wind power potential of Pakistan is 40,000 MW and hydro-power potential is around 45,000 MW, which makes Pakistan one of the most attractive locations for renewable energy investment in South Asia.

He also informed the participants that Pakistan has imposed a moratorium on new imported coal power plants from 2020. “Efforts are also underway to increase the share of renewable in Pakistan’s energy supply mix to 20% in 2025, and 30 per cent by 2030”, FM Qureshi added.

The foreign minister emphasised on the need to boost progress towards achievement of SDG 7. While proposing a transition to a sustainable model of economic growth, the Foreign Minister urged the international community to encourage public investment in renewable energy through policy decisions and stated that there is a need to capitalise on the momentum towards net-zero carbon emission to advance SDG-7 action as two-third of total carbon emissions emanate from the energy sector.

The High-level Dialogue on Energy 2021 was the first global gathering on energy that was held after 1981 under the auspices of the UN General Assembly. The objective was to promote the implementation of the energy-related goals and targets of the 2030 Agenda for Sustainable Development in support of the implementation of the United Nations Decade of Sustainable Energy for All (2014–2024).

Opening the discussion, UN Secretary General Antonio Guterres warned on Friday that 90 per cent of humanity was breathing polluted air and urged nations to stop using coal and other dirty fuels and switch to solar, wind and other types of clean power.

At high-level talks in New York, the secretary general said some 8 million people die prematurely each year due to polluted air and that switching to carbon-free power could be the “difference between life and death”. Renewable energy already makes up 29 per cent of global power generation, he added.

At the talks, nations were expected to unveil 30 new pledges for investment in clean power and putting more of humanity on the grid. “Investing in clean, affordable energy for all will improve the well-being of billions of ” Guterres said.