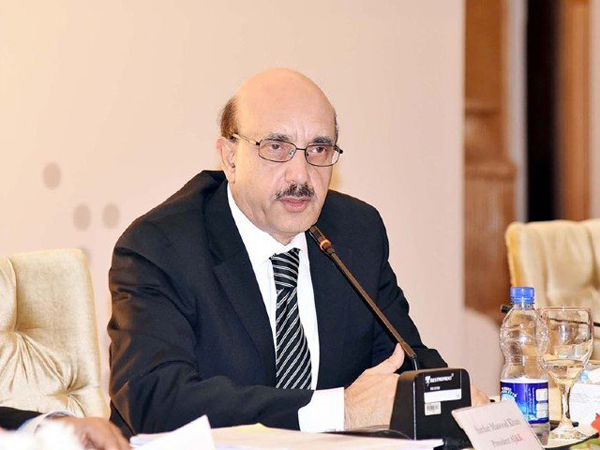 Speaking at a webinar convened by Fahim Kayani, President Tehreek-i-Kashmir, United Kingdom on the sidelines of the UN Human Rights Council session in Geneva, he said that Michelle Bachelet, the High Commissioner for Human Rights and her office are silent at a time when the situation in Indian Occupied Jammu and Kashmir has deteriorated.

Sardar Masood asserted the silence of the UN Human Rights Council on Kashmir because of Indian pressure and global politics was an abandoning of its avowed functions and objectives. The UNHRC must speak and act. There is no excuse for being silent when human rights are being violated in IOJK with impunity.

He said that the Office of the United Nations High Commissioner for Human Rights had failed to publish its follow-up report on its earlier reports publish in 2019 and 2019 despite the most serious crime being committed in the occupied territory.

“India right now is bringing radical change in IOJK’s demographic composition. Nearly 4.2 million non-native Indians, the majority of them Hindus, have been illegally domiciled in the Indian Occupied Jammu and Kashmir. This illegal transfer of population in the disputed territory is a breach of human rights instruments and international law”, Khan said.

He went on to say that if the Human Rights Council remains silent on these glaring violations, it is scuttling its own mandate as a body with universal jurisdiction.

He told the participants and audience of the webinar that the land grab by India in IOJK is in full swing. Nearly 80 percent of Kashmiris’ land has been confiscated to build illegal settlements in IOJK. The other such examples are in the occupied Palestinian territories or during apartheid in South Africa. Land laws in IOJK have been amended by the occupation authorities to deprive Kashmiris of their ownership rights and it must be stopped.

Ex- AJK President stated in his speech that Kashmiri youth are being killed, blinded, illegally detained, and tortured in concentration camps. Genuine leaders were behind the bars. Asiya Indrabi, Masarat Alam Bhatt, Yasin Malik, and Shabir Shah – all were in the most notorious prisons. Mir Waiz Umer Farooq was under detention. They must be released immediately. No ifs and buts; no false charges of terrorism.

Referring to the recently forced burial of popular Kashmiri leader, Syed Ali Geelani, Masood Khan said the barbaric Indian act has shocked and pained all of us. Kashmiris who love him (Geelani) wanted to pay homage to him.

“By this act, India has already turned his grave into a monument of liberty. His call for self-determination reverberates in the hearts and minds of the people. His covert burial reveals once again how removed the occupiers are from reality”, Khan said.

He further said that in Geneva, we reached out to the members’ states of the Human Rights Council and human rights movement to sensitize them to the precarious situation in IOJK leading to erasure of a people. I am sure that your presence in Geneva ensured the continuity of that effort.

He said that the international civil society should know that the civil rights of Kashmiris were their rights too. Either human rights were universal or they were not. And if they were and in fact they were, every Kashmiri killed in Kashmir was their responsibility too. They should call out India and restore the state of justice in the occupied territory.