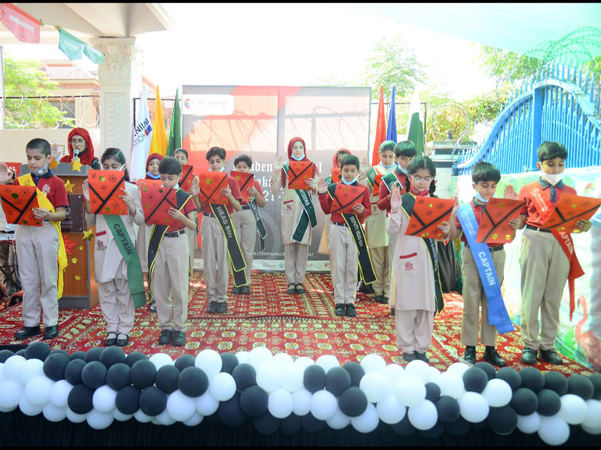 The student council comprising of primary and lower secondary level vowed under oath that they will be active and responsible members of the student executive council and will abide by the laws made by the school and the managing body to guarantee themselves and the student body a better campus life.

Pakistan Tehreek-e-Insaf (PTI) Senator Seemee Ezdi graced the occasion and inducted the school’s head boy and head girl as well as the executive council members of all clubs and societies established within the school system.

After administering the oath, Seemee Ezdi along with principal of Millennium school Mayfair Campus,Uzma Rafay awarded badges and certificates to the members of the council which were received with pride and diligence.

Principal Madam Uzma Rafay congratulated and advised the students to work with responsibility and honesty and to uphold these honorable positions with integrity. She described the council Member as a platform for the council to learn how to maintain discipline, interact with their peers and aid their fellow students. She also emphasized on leadership and determination of the youth to make a revolutionary change in Pakistan.

Seemee Ezdi expressed her views about the ceremony and enlightened the Millennials about her future vision. She encouraged the students to work hard towards their respective clubs/societies and focus on the diligence of punctuality, discipline and planning activities that would be beneficial for the entire student body.

In her closing remarks, principal Uzma Rafay emphasised the importance of upholding these official positions and respecting the roles that they have promised. As many as 47 Millennials were sworn in under the oath as part of the student council and promised to strive for the betterment of not only the school but that of the society in general.