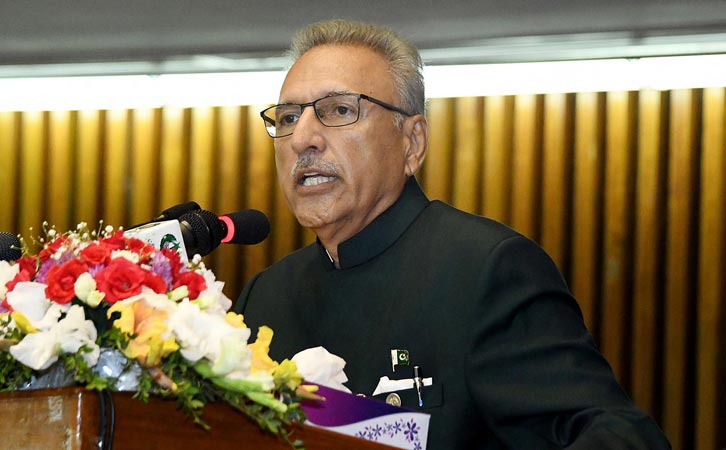 President Dr Arif Alvi Thursday while lauding their approach on international issues, said the leadership of Pakistan and Saudi Arabia was capable to lead the world through their vision.

The president, addressing a seminar on ‘Pak-Saudi Relations: Past, Present and Future’ held in Islamabad, said having their religious affinity, the people of Pakistan were devoted for security of the holy land of Saudi Arabia.

The president said the first treaty of friendship between Pakistan and Saudi Arabia was signed in 1951 and that both the countries had a long history of friendship.

He said even after India carried out atomic explosion, Pakistan’s friendly countries stood by it to build the capacity and achieve deterrence.

The president especially lauded the treatment of Pakistani workers in Saudi Arabia, who also contributed to Saudi development besides sending remittances to Pakistan.

He viewed that no incident in the history could hurt the Pak-Saudi relationship as both the countries showed their exemplary friendship even at international forums.

He said at a time when the commercial and other vested interests dominated the international affairs, the world needed a leadership which formulated its policies on the basis of morality. Pakistan and Saudi Arabia can fill the gap, he added.

Lamenting the phenomenon of fake news, the president said the Holy Quran had also warned about the same tendency which also led to the prevailing situation in Afghanistan and Iraq.

The president appreciated the vision of Saudi Crown Prince Mohammed Bin Salman for environment protection as well as Saudi Vision 2030 which featured the development of a modern and unique city.

He said Pakistan and Saudi Arabia effectively handled the COVID pandemic regardless of whatsoever the fake news said about the two friendly states.

President meets Danish envoy: Separetely, Alvi said it was the responsibility of health care workers, pharmacists and other relevant organizations to promote medical ethics and discourage the excessive prescription of antibiotics to patients.

In a meeting with ambassador of Denmark to Pakistan Lis Rosenholm, he said the medical professionals needed to discourage the practice of unnecessarily prescribing the antibiotics.

Pakistan evacuated foreign nationals and members of international organizations from Afghanistan through air and land routes, he added.

The ambassador briefed the president about the medical ethical practices and high quality healthcare system of Denmark.

The meeting focused on the promotion of medical ethics in healthcare system of Pakistan.

The attendees emphasized the need to inculcate ethical and best practices of health services delivery among health professionals.