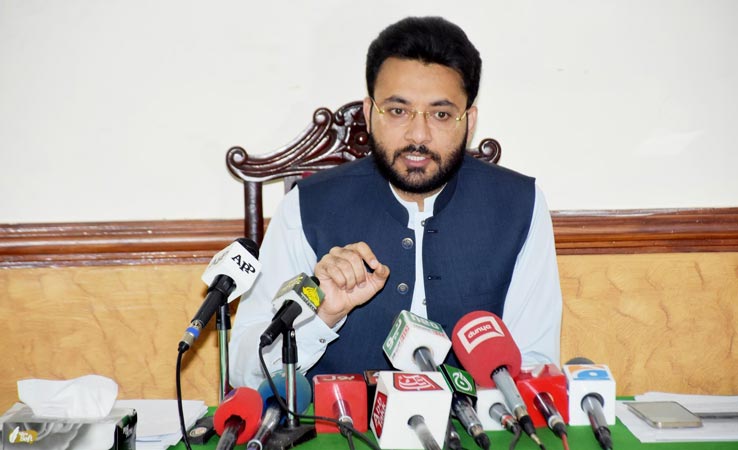 Talking to media persons, he said Maryam did not have any evidence to prove her innocence before the court in the Avenfield case. She was opting delaying tactics to further slowdown the accountability process, he added.

Instead of calling for the case hearing on merit, he said the PML-N vice president had already sought over a dozen adjournments by resorting to different excuses such as ill-ness of her lawyer. Farrukh said her father Nawaz Sharif had already been at large after he was convicted in different corruption cases.

It was welcoming development that the money they had looted from the national exchequer was being recovered through auction of their properties in the country. It was the major development which perturbed the PML-N leadership at the moment, he said.

He dared Maryam to produce supported evidence and request the court to hear her case on daily basis if she assumed herself innocent. The minister lashed out at the PML-N leadership for preferring their personal interest over matter of the national importance.

He said as the government was exposing Indian involvement in cancellation of New Zealand through its fifth generation war launched against Pakistan, the PML-N resorted to blame the authorities for this unfortunate incident. Maryam Nawaz’s twitter handle remained silent and did not bother condemning Indian fake propaganda against Pakistan, he said.

Farrukh wondered over sudden change in Maryam’s behaviour about the Election Commission of Pakistan (ECP), reminding her of the onslaught she launched against the election watchdog outside its building some six months ago.

Referring to the PML-N attacks on the state institutions in the past, he said it was the same party which vandalised the apex court building and forced a judge to get the decision of its own choice. It was the same party whose several ministers were disqualified after Panama case for using derogatory language against upright judges, he said while recalling the recent attack by what he called the PML-N goons outside the National Accountability Bureau (NAB) building under the supervision of Maryam.

He linked the PML-N’s aggressive approach against NAB with its ongoing efforts for recovery of money looted by their leader Nawaz Sharif who had been declared an absconder by the court.

The minister said it had become habit of the PML-N to attack the state institutions for their vested interests. Therefore, he added, the PML-N leadership had no right to lecture the government on giving respect the state institutions. He said the PML-N leadership preferred to stay in the country when they were in power, but went abroad once they were out of power. “Maryam would have gone abroad if her name had not been on the Exit Control List,” he claimed.