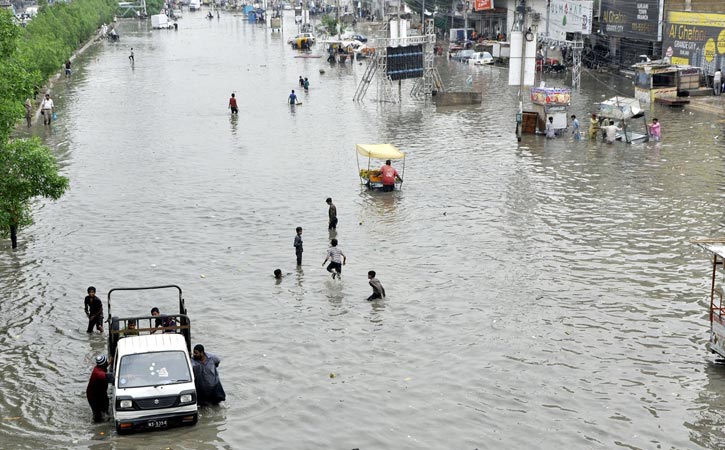 Moderate to heavy spells of rain lashed Karachi on Thursday, causing urban flooding and a lot of hardships for motorists and pedestrians.

As the water started accumulating in different areas of the city leading to blocked roads, a viral video showed an upturned truck floating in the water near Nagan Chowrangi. Meanwhile, motorists and pedestrians could be seen facing a hard time walking on the roads or driving their vehicles due to the rising water levels on the roads.

While out on a post-rain tour of the city, Karachi Administrator Barrister Murtaza Wahab said areas such as North Nazimabad, New Karachi and North Karachi saw flooding because of problems with the Green Line bus project infrastructure where two small pipes were unable to carry all the water.

He said while one side of the Nagan Chowrangi road was “completely clear”, the other side was inundated because rainwater had been blocked by the Green Line structure. The flow of water started after work was done to clear the pipeline, Wahab added. Responding to criticism directed at the Sindh government in the aftermath of today’s rain, the PPP leader said, “Those railing against the Sindh government were saying [only] 10 days ago that rainwater did not accumulate in Karachi because the federal government had cleared the city’s nullahs. Where are these people now who were taking the credit?”

K-Electric, meanwhile, said its staff were working to restore electricity in the areas where rain caused blackouts. It said power supply was continuing through more than 1,850 feeders.

The Pakistan Meteorological Department (PMD) has predicted rains and thundershowers in several areas of the metropolitan on Friday and Saturday as well. PMD Director Sardar Sarfaraz said moderate to heavy rain is expected tonight and tomorrow.

He warned of urban flooding in low-lying areas of Karachi on Friday, saying that the monsoon system has strengthened due to the moisture from the Arabian Sea.

Sarfaraz said that clouds do not pour equally in all areas. Rain was reported in a large number of areas in the city, including Nazimabad, North Karachi, Gulistan-e-Jauhar, Orangi Town, Gulshan-e-Hadeed, DHA Phase-II, Saadi Town, and Kemari.

According to the Met Office, most rains was recorded in Surjai Town at 70 millimetres, followed by 49.2mm in North Karachi and 47mm at PAF Base Faisal.