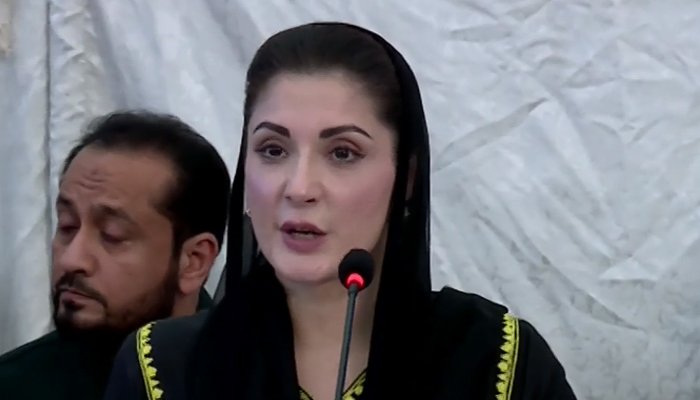 PML-N Vice President Maryam Nawaz Sharif has said that it is the habit of the government to take on anybody who exposes its inefficiencies, explaining same is the case with the Election Commission of Pakistan (ECP) which is being hammered by the government for raising objections over the use of Electronic Voting Machines (EVMs).

She was talking to the media after attending the hearing of her and Capt ® Muhammad Safdar appeals against their convictions in Avenfield reference in Islamabad High Court on Thursday.  Maryam held that the use of EVMs was a new method to rig the election. She said that the government wanted to exclude the role of opposition.

“The government which comes to power through rigging, it can never be interested in transparent elections,” she added.  When a media person asked her about the PML-N stance if National Accountability Bureau Chief Justice Rtd.  Javed Iqbal got an extension in his tenure in the same way as the Army Chief had got extension by the government, Maryam retorted she didn’t endorse the extension.

The PML-N vice-president said that the rulers used to stand on containers and would give examples of accountability. When the time for accountability has arrived, they refuse to answer, Maryam stated adding that it’s not the property of rulers, it’s the public property.

A couple of days ago, the government refused to share details of foreign gifts presented to Prime Minister Imran Khan. She deplored that the government’s failure was evident at every diplomatic forum.

She termed the news of Nawaz Sharif’s Covid-19 vaccination at a Lahore hospital yesterday funny as the PML-N supremo is currently in London.  She lashed out at the government saying its Covid-19 vaccination details were also fake. Such faulty data might add to the restrictions on Pakistanis at the international level.

She said that PM Imran had himself stated that when the prices of electricity, gas and petrol were hiked, it would mean that rulers were thieves.  “By this rule, Imran Khan Niazi is the first ‘certified thief’ of Pakistan,” Maryam maintained.

Earlier, the NAB submitted a petition in the Islamabad High Court for the daily hearing of the Maryam and Capt ® Safdar cases. NAB Deputy Prosecutor General Sardar Muzaffar Abbasi filed the petition.  NAB lawyer alleged that Maryam and Capt ® Safdar were making a deliberate delay in the hearing of the cases. Maryam’s counsel has been getting new dates of hearing for the last one year, the NAB lawyer added.  He said that the NAB wanted the case to be heard on daily basis and the court would decide it within 30 days.