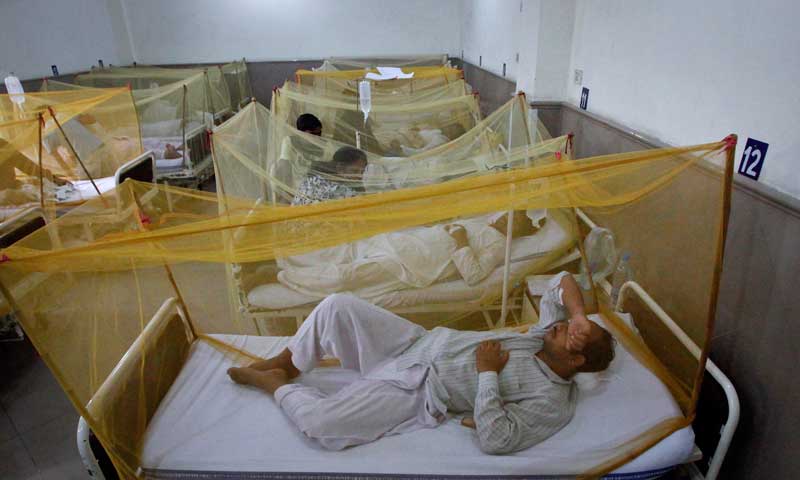 As the number of dengue cases are increasing again in the country, two people died in Islamabad due to dengue fever and dozens were infected from it in Lahore and Khyber Pakhtunkhwa. However, 126 new cases were reported in Lahore yesterday (Wednesday).

The Dextran 40 drip which is essential for the treatment of dengue patients is not available in the markets. Punjab Government Dengue Expert Advisory Group meeting revealed that there was no stock of Dextran 40 drip. Health teams reported 7,130 in-door and 3,893 outdoor inspections to detect dengue larva. The larvae have been discarded from 94 places in the metropolis Lahore.

Moreover, Punjab Health Secretary Imran Sikandar said that 31 new cases of the dengue virus were reported in Lahore taking the total number of confirmed cases to 687 this year. The Islamabad District Health Officer said that 14 more people were infected from dengue virus taking the tally to 107.

On the other hand, Vector Borne Diseases (VBD), Department of Directorate General Health Services Sindh has recorded 338 dengue cases from September 1 to September 21 across the province. Out of total cases in Karachi division, 51 cases are in East District, 23 in Korangi and 23 in Malir Districts, 37 in South District and 21 in West District. As many as 84 cases have been registered in Hyderabad division, while 12 cases have been recorded in Mirpurkhas Division of the province.

Earlier, Yasmin Rashid said the dengue could not be declared as pandemic, but the virus was spreading in Punjab including Rawalpindi for which effective strategy and preventive measures were needed to avoid it. She urged for making special arrangements to control it as prevailing weather was most suitable for larvae breeding.