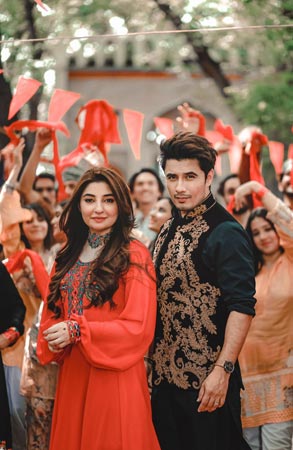 After the huge success of Laila O’ Laila and Allay, Ali Zafar has dropped an electrifying Pashto song “Larsha Pekhawar” featuring none other than Gul Panra and very talented rap trio from Peshawar, ‘Fortitude Pukhtoon Core’. The Channo singer dropped his rendition of one of the oldest and most celebrated Pashto folk tune. This is the third regional song by Ali Zafar and it is dedicated to the Pashtun Culture Day celebrated on September 23. ‘Larsha Pekhawar’ by Ali Zafar is a visual and audio treat as it protects the song’s lingual authenticity and is carefully reproduced with love for modern audiences around the globe. The acclaimed singer took to Twitter to share the music video, stating, “Dedicated to one of the bravest, greatest and most resilient people – Pashtuns”. The singer’s earlier two regional songs, Laila O’ Laila and Allay, have altogether crossed a record 67 million views on YouTube alone. The heartfelt tribute to the Sindhi traditions and culture, Allay, featuring rap star Abid Brohi garnered 30 million views on YouTube in just nine months.