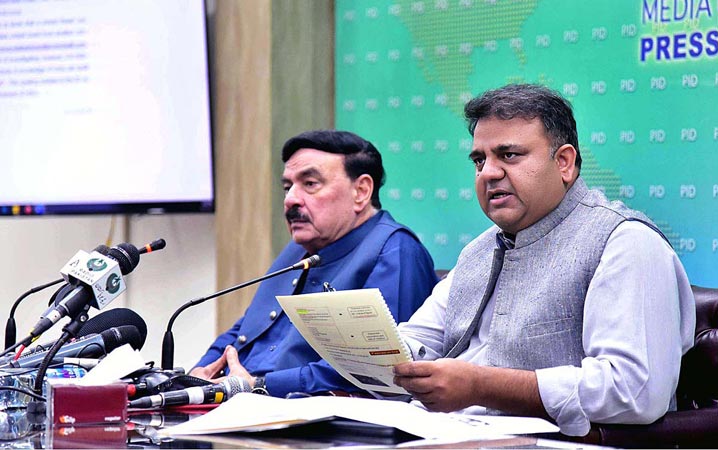 Federal Minister for Information Fawad Chaudhry held a press conference on New Zealand’s withdrawal from the recent ODI series in Pakistan and revealed that a threatening email was sent to the visiting side from India.

Joined by Interior Minister Sheikh Rashid, the information minister spoke about the strict security measures in place for the New Zealand squad.

Fawad Chaudhry spoke about a fake social media post that was shared with former TTP commander Ehsanullah Ehsan’s name in August, adding that the post had warned the New Zealand cricket team against touring Pakistan.

“The post stated that New Zealand cricket team should not go to Pakistan as Daesh would attack it,” revealed the information minister.

Chaudhry said that an article was published in The Sunday Guardian two days later (on August 21) by the paper’s bureau chief Abhinandan Mishra, who wrote the same thing: that the New Zealand cricket team could get attacked in Pakistan.

He said the email was sent using ProtonMail, adding that those who knew about the service were aware that it is a secure email service. He said Pakistan had asked Interpol to assist it further in probing the email and the perpetrator behind it. He said that despite “all these threats” the Black Caps did not cancel their tour and arrived in Pakistan.

Chaudhry said that a chartered flight had brought the New Zealand team on September 11.

“A detailed program containing their protocols and security was issued by the interior ministry, which included the squad being accompanied by two helicopters,” shared the information minister.

Chaudhry said that the New Zealand squad, on September 13, travelled from their hotel to the Rawalpindi cricket stadium along with the Pakistani players, where they held a “full practice session”.

“I would just like to remind you that both Pakistan and New Zealand’s security agencies had probed and arrived at the conclusion that the threats issued on August 19, 21 and 24 were all fake,” he noted. He said the team again travelled to the same stadium on September 14 and held another training session there, with the same security protocols in place. Chaudhry said New Zealand Cricket (NZC) informed the PCB and Pakistani authorities at 10:30am on September 17 that the team has received information of a security threat from their government. The information minister said that the New Zealand cricket team itself was not affected much by the threat as the environment at the ground and the hotel was secure.

He said PM Imran Khan had, despite being busy with official engagements in Dushanbe, phoned New Zealand Prime Minister Jacinda Ardern, requesting her not to abandon the tour at the last minute.

“She, however, said they [New Zealand government] had received a ‘critical threat’ that their team would be attacked,” said the information minister.

The information minister said another email, after the tour was cancelled on September 17, was sent to the New Zealand team on September 17 at 11:25pm PST, from an ID generated under the name Hamza Afridi.

He said that Interpol Wellington intimated Interpol Pakistan about the threat on September 18. The minister read out the email’s transcript:

“Dear New Zealand Cricket, you did wrong to go to Pakistan and now see what will happen to you. Your cricket team is not going anywhere now. In every place, the bombs will be placed now, from the hotel to your flight. My men will not forgive you, they are coming to New Zealand. Pakistan Zindabad, Allah hu Akbar.”

“This email was sent from a device based in India,” he said. “The IP address of the email generated was changed using a VPN to show Singapore as the location,” revealed the information minister.

“The device which was used to send the email, further investigation revealed, was operating 13 email IDs,” said Chaudhry. “All IDs were generated on the names of Indian actors and drama celebrities,” he added. Chaudhry said that the device used to send the threatening email to the New Zealand squad belonged to an Indian man named Om Prakash Mishra from Maharashtra.