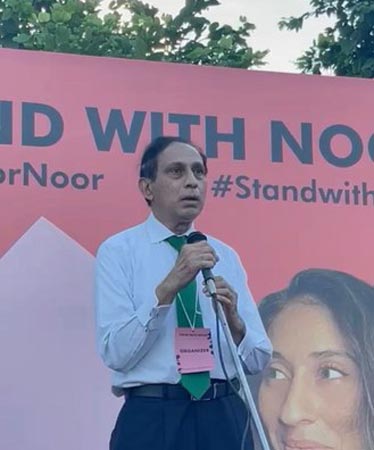 Parents of the murdered Noor Muqaddam Wednesday staged a protest demonstration to get justice for their daughter in front of the National Press Club in Islamabad.

A large number of civil society members and showbiz personalities participated in the protest and raised slogans against the girl’s killing.

Talking to the media, the father of the murdered girl, Shaukat Muqaddam, who is Pakistan’s ex-envoy, said that it was a test case for the government. He said his daughter has gone and he wanted to save the daughters of others by getting justice in this case.

He said his mission was to keep homes and offices safe for women in Pakistan and he was thankful to the media and the civil society for supporting him in this regard. He also thanked Prime Minister Imran Khan for giving an interview and expressing sympathy regarding the Noor Muqaddam case to them. He showed a hope that they would definitely succeed to get justice for his daughter.

Pertinent to mention here that on Wednesday morning, the police’s investigation into the murder of former Pakistan envoy’s daughter Noor Muqaddam had been laid bare as five, out of total 12 people nominated in the case, including Zahir Zakir Jafer, the main accused, were released after they managed to obtain bails.

It has emerged that police has named not a single person as an eyewitness in the case; not even the gardener and the security guard who were present at the time of commission of the crime. Rather, they were nominated as suspects in the murder case.

And several witnesses named in the case, including policemen and doctors, are all state witnesses. Legal experts have said that ignoring eyewitnesses in the case amounts to benefitting the accused in the case, particularly the main accused namely Zahir Zakir Jaffer.

Even Khawaja Haris, counsel for the accused, has prayed to the court for the release of Zahir, his father Zakir and mother Asmat Adamji precisely for the same reason. Earlier, during the hearing of a bail petition filed by the main accused’s parents in the Islamabad High Court (IHC), counsel for the state argued that the petition should be heard by a division and not a single bench.

Justice Amir Farooq asked as to on what legal basis the petition should be heard by a division bench rather than a single bench. ustice Farooq directed the counsel to ask the advocate general of Pakistan (AGP) to himself give arguments in the court.

“Despite the sensitivity as well as extreme importance of the issue, you are behaving like this. The discussion on the case lasted for three days and still you are not prepared,” the judge remarked while addressing the state counsel. Khawaja Haris, counsel for the main accused as well as his parents, prayed to the court to check whether orders had been given for the setting up of a special court to hear the murder case.

The IHC, on the occasion, directed the court staff to inquire from Registrar Office and Session Judge Office whether such notification had been issued.