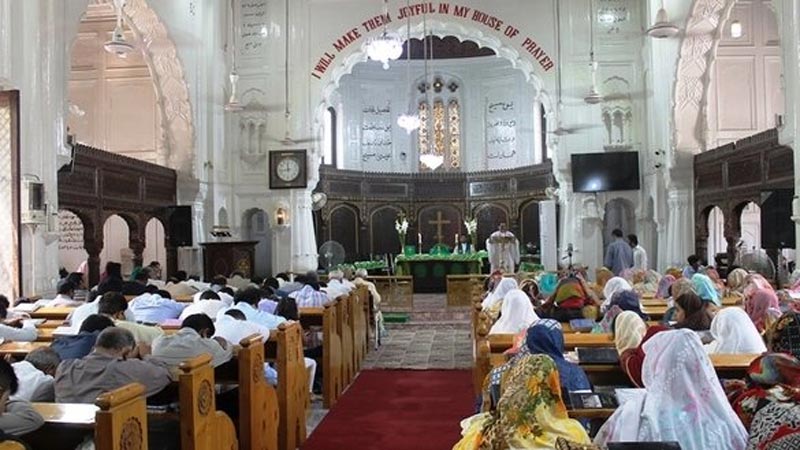 The leadership of the Church of Pakistan on Wednesday urged the government to ensure the security of the Christian population and protection of their worship places, as Christians across Pakistan and in other parts of the world observed the eighth anniversary of the terrorist attack on the All Saints Church in Peshawar in which over 100 worshippers, including several children, were killed and dozens others were wounded.

In a joint press statement, senior leaders of the Church of Pakistan, including Moderator/President Bishop Dr Azad Marshall, Bishop of Peshawar Diocese Humphrey Sarfaraz Peter, Bishop of Sialkot Diocese Alvin Samuel, Bishop of Multan Diocese Leo Roderick Paul and others said that the martyrdom of worshippers in the All Saints Church in a dastardly terror attack was still fresh in the minds of Pakistani Christians.

“Today, we remember all our brothers, sisters and children who were killed and injured in the twin suicide bombings on the congregation of the All Saints Church in Peshawar in 2013.”

“It is our firm belief that our martyred fellow Christians are resting in eternal peace in the arms of our Lord and Savior Jesus Christ. However, the wounds of losing their loved ones are still fresh in the minds of the victim families and we continue to keep them in prayer every day so that God’s grace may bring peace and comfort to their mourning hearts,” said Bishop Marshall.

He added that special prayer services were held at the All Saints Church in Peshawar and the Praying Hands Cathedral in Lahore for the victims of the church attack and their survivors.

The CoP president urged the federal and provincial governments to expedite the legislation process for creation of a Rs200 million endowment fund for the victims of the church attack under which a monthly stipend would be provided to orphaned boys until they are 18, and to orphaned girls even after they turn 18, if they are unmarried. Widows would receive a lifetime stipend until they remarry.

“We acknowledge the governments’ instant compensation package for the martyred and injured persons but a lot more needs to be done for the victim families,” he stressed.

The senior church leader also called on the global Christian community to remember, pray, and speak up for those affected by the bombing of All Saints Church and other instances of persecution.

In his message, Bishop of Peshawar Humphrey Peter said that the government must honour and protect the identity, existence, dignity and the basic constitutional rights of the Pakistani religious minorities.

Meanwhile, in a separate message on the occasion, Archbishop of Canterbury Justin Welby recalled “the astonishing grace and courage of the survivors [of the church attack] I met.”

“They still struggle with pain, grief and trauma. My heart breaks as I pray daily with thanksgiving for Pakistan, its churches, its people and its government,” the archbishop stated in his statement.

The leader of the Anglican Church called on the British government to renew its commitment and action in support of freedom of religion and belief.

“In enjoying the freedoms we treasure here in the UK, let us also defend the rights of all faiths and none to express themselves openly elsewhere, to disagree and debate in peace,” he said.