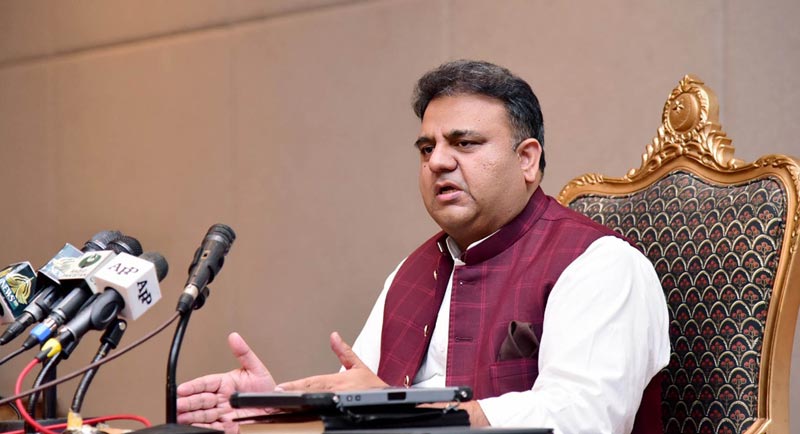 The phrase “absolutely not” comes at a price that nations have to pay if they aspire to keep their heads high, Minister for Information Fawad Chaudhry said Tuesday, after the England and New Zealand cricket teams cancelled their Pakistan tours.

Prime Minister Imran Khan had, back in June, clearly said that Pakistan will “absolutely not” give its military bases to the United States for operations in Afghanistan after the latter’s withdrawal of troops – months before the Taliban took over the country.

The information minister, addressing a press conference, said he and Minister for Interior Sheikh Rasheed Ahmed would brief the media on what has been transpiring lately. “You will see how fake news and hybrid war are inter-linked.” Chaudhry said his briefing with Rasheed would highlight the matter with charts and other relevant data.

“PTV alone has suffered losses worth Rs220 million and we are now seeking our lawyers’ guidance on how to drag [New Zealand and England cricket boards] to court,” he said.

“If you want to keep your head high, then you have to pay the price, and I believe that the Pakistani nation is ready to face this,” the information minister said. His remarks come a day after the England Cricket Board (ECB) announced that it was cancelling its team’s tour of Pakistan following New Zealand’s last-minute decision to pull out due to a “security alert”.

In a blistering response to the cancellation of the tour by the ECB, Pakistan Cricket Board (PCB) Chairman Ramiz Raja said he was extremely disappointed with England.

“it was quite expected as the western bloc gets united in an attempt to back each other, unfortunately. England withdrawal is unjustified; Pakistan cricket will prevail,” he said in a video statement.

Raja had also vowed to get compensation from New Zealand Cricket (NZC) at all costs in connection with the financial loss the PCB suffered due to the pull out.

The seventh census of Pakistan, which is in the approval phase, will be the first one to be conducted via technology, the minister said, adding that it would be completed within 540 days or 18 months.

“We still need a few more details in this regard, and to get them, the prime minister has constituted a committee which will look into the matter and revert to the cabinet,” he said. Chaudhry said it has been decided that the next election, along with using technology, will be held under new delimitations, also noting that it was imperative to work on electoral reforms.

The information minister said if the Opposition does not agree with the electoral reforms, then it should bring its own proposal – not sit idle and create hurdles in the government’s way.

“Their politics only revolves around money. If we drop their cases then they will retire and leave politics,” the information hit out at the Opposition by saying. The information minister said inflation is currently a global phenomenon and that the dollar is depreciating – and both of these combined have hit Pakistan. “The government has taken some big steps in this regard – the Ehsaas Programme and subsidy progammes for the poor.”

Fawad rejected the notion that people’s salaries had not increased. “The income of farmers’ has increased by Rs1,100 billion, of masons has gone up three times, plumbers two times, and labourers two times,” he said. The information minister said the textile industry – which was almost shut down in 2018 – has now started receiving orders and they have hired a lot of labourers.