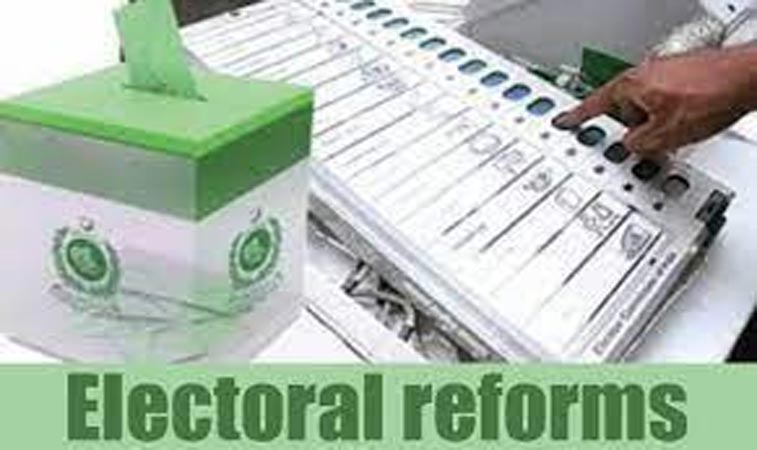 A committee will be formed comprising members from both houses – National Assembly and Senate – to discuss the matter of electoral reforms.

The decision was made during a meeting of Opposition lawmakers with National Assembly Speaker Asad Qaiser and other government lawmakers, a statement on the Lower House’s Twitter handle said Tuesday.

“It was agreed that a committee comprising members from both the Houses would be constituted to work on various issues related to #electoralreforms,” the statement said.

The participants of the meeting decided that motions would be moved in both houses for the formation of the said committee – in a bid to build consensus over the matter.

“It was also decided that Speaker National Assembly would be authorised to nominate members of the electoral reforms committee in consultation with parliamentary leaders,” the statement added.

Minister for Information Fawad Chaudhry had earlier in the day said that working on electoral reforms was imperative.

The information minister said if the Opposition does not agree with the electoral reforms, then it should bring its own proposal – not sit idle and create hurdles in the government’s way.

“Their politics only revolves around money. If we drop their cases then they will retire and leave politics,” the information minister said.

Chaudhry had last week said that the 2023 general elections would only be held after electoral reforms take place.

The Opposition, however, has continued stiff resistance against the government’s proposed reforms – in particular the electronic voting machine (EVM).

Pakistan Democratic Movement (PDM) chief Fazlur Rehman had in August declared the EVM as the “simplest way to rig elections” as the alliance rejected the government’s “unilateral” electoral reforms.

“We reject each and every electoral reform put forward by this selected government, and we believe that NAB and FIA have become political institutions, who have lost their standing, as they are being used against the Opposition,” he had said during a press conference in Islamabad. Meanwhile, the ECP on September 10 said that EVMs can open up the possibility of “more sophisticated fraud” through the manipulation of software and hardware.

EVMs are presented as a solution to rigging in the elections, but they “cannot counter all types of fraud”, the ECP said, in a 34-point letter sent to Chairman Senate Standing Committee on Parliamentary Affairs Taj Haider on Friday, September 9.