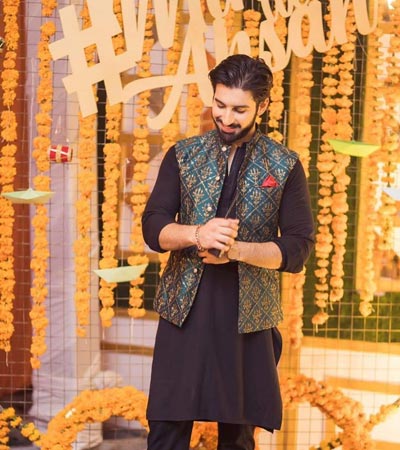 Ever had a last-minute wardrobe emergency before an important event? Well, it happens to the best of us, including actor Muneeb Butt who had to change his outfit right before his sister-in-law Minal Khan’s mayun!

Muneeb Butt opened up about his mini outfit faux-pas when host Nida Yasir asked if he’s ever been over-dressed or under-dressed at an event.

The Baddua actor narrated how he went out and got himself an outfit from a local designer for Minal’s mayun a few weeks back, and while he thought it was the perfect outfit, he didn’t quite realise just how dressy it was – a complete set of green raw silk kurta pajama with a green waistcoat to tie the look together!

“Whenever I dress up and go out, I always show my mother and she tells me how I look… So, I got dressed on the day of the mayun and walked out to show my mother that I’m ready…” shared Muneeb, and that’s how he got a rude awakening!

“My mother was like ‘You look like a dulha!” he recalled. “I walked back to my room and realised that I actually was over-dressed. I had to then change into a completely different kurta. I chose a black kurta and then wore the waistcoat over it to balance it out.”

While the incident itself was embarrassing, Muneeb Butt is thankful that he realised early and had the time to change! “If you realise later on when other people point it out, then it gets even more awkward and you lose confidence,” he said.

We have to say, all’s well that ends well because Muneeb sure looked sharp in his final outfit!