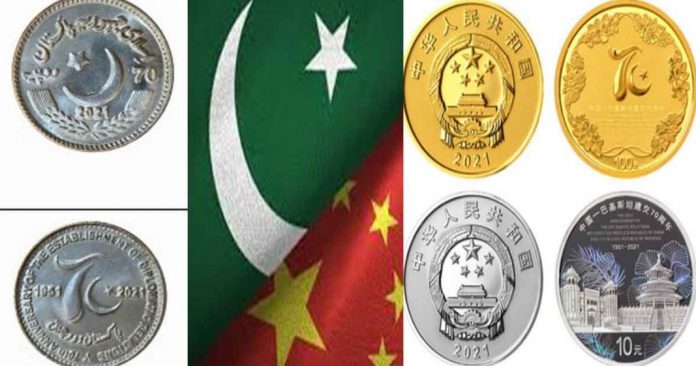 BEIJING: In order to commemorate the 70th anniversary of establishment of diplomatic relations between Pakistan and China, the People’s Bank of China has issued special commemorative coins to mark this important milestone in history of bilateral ties.

The gold and silver coins of 10 and 100 RMB denomination weigh 8 and 30 grams respectively.
The backside of silver coin displays the Lahore Fort of Pakistan and Summer Palace of Beijing while the gold coin features the official logo of Pakistan-China 70th anniversary celebrations.

The commemorative coins have been specially issued to chronicle the seven splendid decades of the Pakistan-China All-Weather Strategic Cooperative Partnership and signify unique fraternal ties between the two countries.

The State Bank of Pakistan had issued a commemorative coin earlier this year to celebrate the 70th anniversary of establishment of diplomatic relations between Pakistan and China.