Fashion talk and the way forward during pandemic

* We speak to the esteemed designer/actor on his inclusion in the Atlas of Fashion Designers, the return of his D Philosophy label and the importance of a voice of reason to be out there 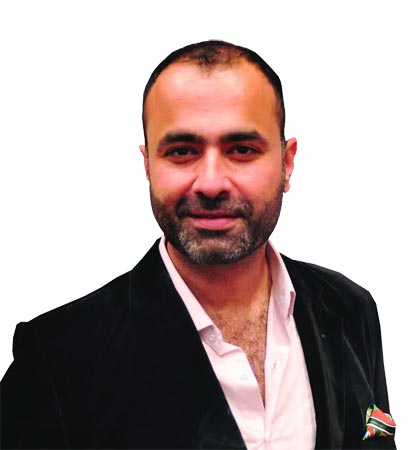 You cannot talk to Deepak Perwani in one go and not crack up in between.

I love his sense of humour. His name needs no introduction. Most of us have grown up knowing and gushing over this suave and immensely talented fashion designer’s beautiful outfits and his short stint with acting also.

I remember when growing up, as much as I knew how big a name the designer is when it comes to fashion and style, I watched this drama serial in which he starred alongside Nadia Jamil and rubbed shoulders with Moammar Rana, a fantastic serial with an amazing soundtrack that had all of us glued to our television screens. His personality stood out and the fact that his presence was so great, this shows and reflects in every work that he produces.

There is a distinct appeal and a standout factor to his designs, that upon looking, one is sure a man of substance has created these. I remember attending a fashion week, in which Deepak Perwani showcased a beautiful bridal collection, and for each and every outfit to look so pretty and different from the other, and at the same time, resonating the culture and tradition a Pakistani bride wants to uphold when donning a bridal on her special day, left everyone stunned. Each outfit was a dream!

Perwani is the only Pakistani designer to be featured in the Atlas of Fashion Designers by Laura Eceiza. The book offers a comprehensive, fluid and diverse approach to the subject of contemporary fashion

At a pret fashion week, the evening wear and the cocktail dresses exuded a subtle sexiness to them. And then there was another showcase, where the designer presented his unforgettable Frida Kahlo collection that is fresh in our brains till date. It was an amalgamation of colour, cheer and the true essence of a woman who stands out and makes heads turn.

Perwani is the only Pakistani designer to be featured in the Atlas of Fashion Designers by Laura Eceiza. The book offers a comprehensive, fluid and diverse approach to the subject of contemporary fashion.

“The fact that Pakistani designers are mentioned in The Atlas of Fashion Designers, the new age fashion designers, clearly shows where the Pakistani fashion is going. I think it is a proud moment for not just me or for us as a design house, it’s a massive proud moment for the entire Pakistani fashion industry because as I grow, we grow. And to be taken seriously on an international platform like this, this is our second feature in an international book, the first one being The Atlas of Fashion Designers, and the second being Frida Kahlo: Fashion as the Art of Being, and our dress being featured in it also shows that the Pakistani fashion is progressive and it leads the way for everyone who is a Pakistani fashion designer,” Perwani said while talking exclusively to Daily Times.

Currently, the designer is working on his Fall/Winter collection, comprising of formals and bridal wear and the return of his D Philosophy label.

We respect the designer all the more for being straightforward and forthcoming, something which often stirs controversy as well.

“For any industry to grow or move forward, I guess, the truth is always the road less travelled – like they say that mediocrity has many friends and truth has very few but that does not mean that what is right is right, and what is right should be set. I personally feel that unless and until we keep on voicing things like copying, forgery, originality and concepts then what really is left to fashion, except paying money to get your product out there whether its original or not? So yes, a voice of reason needs to be there, especially for the younger generation, to understand the history and past of fashion and follow it,” Perwani says.

Perwani describes himself as forward, fashionable and fantastic and we want to add inspirational and iconic with an amazing sense of humour also

The designer says he will always stand up for what’s right. “The right could be of a poor person or it could be from an influential person; right is right and wrong is wrong and that difference is something that is a bitter truth at times but I think in the longer run its beneficial for any business or industry.”

Last year, the designer donated reusable and disposable PPE suits amidst the pandemic. “We do as much charity as we can possibly. Yes, we give out a lot, we gave about 18,000 PPEs last year because that was the requirement of the times. We are still continuing with our charitable work in the interior Sindh. Winters are coming up, that means we will be sending clothes for small children, along with shoes, bags, socks, jackets, blankets, mosquito nets and many other things, like reusable solar lights for the winters, and things that the poor and the marginalized can keep themselves warm with. So we mostly work with children between two-four years old infants and with kids up to 12 years old and we try to make a small change by giving them as many clothes as we can buy and provide to make their winters more comfortable,” he tells us.

Despite the pandemic, the Hum Bridal Couture Week was held earlier this year, followed by Fashion Pakistan Week, giving us hope that fashion weeks are soon to make a comeback, but there have been no announcements for fall season. Perwani says, for any industry to grow, the process must continue, whether it’s BCW, PFDC, FPW, Lux or Hum Style Awards or any of the other numerous awards that happen, whether they’re going to happen this year.

“As far as we are concerned, we are working on our solo show and collection, hopefully we should be ready by November 1 to launch our solo show,” he says.

Perwani says he’s a multi-faceted human being and if he’s out there focusing on wanting to achieve anything, then possibly he can achieve anything that he wants and that’s the kind of belief he has in himself and in his brand.

“There’s still a lot of fashion to go and yes, everybody’s delving into bridal wear but you have a plethora of young designers who like to do experimental, cool and edgy stuff and to be honest, I’ve kind of gotten bored with the whole bridals and formals thing and that’s one of the reasons why I am reviving the D Philosophy because at least I had some fun when you know that kind of fashion was being done. And now that I look back into what people really liked internationally from my collections, including Flight of Fancy and the Milan collection, which was of course the inspiration for Dolce & Gabbana, or Frida Goes to Kharadar, and all of these collections or the 10 pages in that book, all of these are primarily D Philosophy, which is about international fashion and how we look at them. So yes, excited to be coming back with that one.”

Perwani describes himself as forward, fashionable and fantastic and we want to add inspirational and iconic with an amazing sense of humour also.