Pakistani artist among finalists for the prestigious Jameel Prize 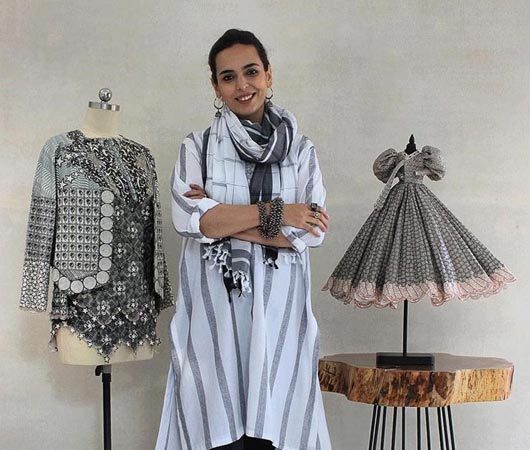 Pakistani artist Bushra Waqas Khan was shortlisted along with seven other artists for the prestigious Jameel Prize award, now in its 6th iteration.

Organised by the Victoria & Albert Museum, London, in partnership with Art Jameel, the winner was announced in a virtual prize ceremony on September 15, at 6pm.

Khan was shortlisted from a pool of over 400 artists from around the world.

The finalists showcased their work in a special exhibition titled Jameel Prize: Poetry to Politics at the Victoria and Albert Museum in London, before touring internationally with Saudi artist Ajlan Gharem’s architectural installation Paradise Has Many Gates winning the first prize.

Jameel Prize: Poetry to Politics is the first international exhibition to focus on innovative contemporary design inspired by Islamic tradition. It opens to the public on September 18.

Bushra Waqas Khan lives and works in Lahore, Pakistan. She is trained as a printmaker, and is known for the miniature garments she designs. The catalyst for her creative practice is affidavit paper, or oath paper, which is used for all official documents in Pakistan.

The finalists showcased their work in a special exhibition titled Jameel Prize: Poetry to Politics at the Victoria & Albert Museum in London, before touring internationally with Saudi artist Ajlan Gharem’s architectural installation Paradise Has Many Gates winning the first prize

Affidavit paper often carries national emblems like the star and crescent alongside motifs and patterns from Islamic art and design. Contracts are printed and signed on this paper – it signifies authority and ownership, something kept safe over generations.

The Jameel Prize will showcase the first spectacular dress Khan ever made, which is just 50cm tall. The dress nods to colonial influences on dress in South Asia and the presence of Islamic design in everyday life in Pakistan

With diverse practices spanning graphic design and fashion, typography and textiles, installation and activism, the finalists engage with both the personal and the political, interpreting the past in creative and critical ways. The works in the exhibition will address global events and lived realities and the legacies of language, architecture and craft.

The Jameel Prize, founded in partnership with Art Jameel, was conceived after the renovation of the V&A’s Jameel Gallery of Islamic Art. The gallery is an outstanding presentation of the rich artistic heritage of the Islamic Middle East and the Prize aims to raise awareness of the thriving interaction between contemporary practice and the great historical legacy of the region. It has also contributed to a broader understanding of Islamic culture as well as its place in the contemporary world.

Launched in 2009, the winner of the first Jameel Prize was Afruz Amighi for her work 1001 Pages, an intricate hand-cut screen made from the woven plastic used to construct refugee tents. In 2011 Rachid Korai?chi was awarded the prize, for his work Les Mai?tres Invisibles, a group of embroidered cloth banners which display Arabic calligraphy and symbols and ciphers to explore the lives and legacies of the 14 great mystics of Islam. In 2013 the winner of Jameel Prize 3 was Dice Kayek, a Turkish fashion label established in 1992 by Ece and Ays?e Ege for their series Istanbul Contrast, a collection that evokes Istanbul’s architectural and artistic heritage. This was the first time the Jameel Prize was awarded to designers. In 2016, the winner of Jameel Prize 4 was Ghulam Mohammad, who trained in the Islamic tradition of miniature painting, for his works of paper collage. In 2018 the first ever joint winners of Jameel Prize 5 were Mehdi Moutashar -awarded for his bold work of minimalist abstraction rooted in Islamic geometry and Marina Tabassum – for her visionary Baitur Rouf mosque built in 2012 in Dhaka, Bangladesh.

Now a triennial Prize, the sixth edition in 2021 marks a new era. Future Jameel Prizes will be dedicated to a single discipline, with the 2021 edition focusing on contemporary design.