* Eugene asked, 'OK, they wouldn't be doing this on purpose, would they?' 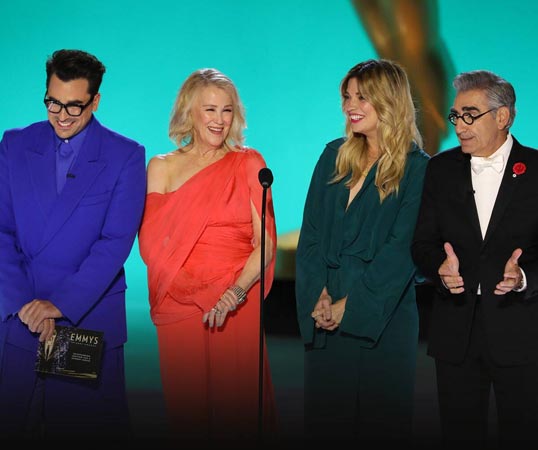 Oops, David! After sweeping the 2020 Emmy Awards, the cast of Schitt’s Creek had a special reunion at this year’s ceremony-and it included a little tech mishap.

Emmy winners Dan Levy, Eugene Levy, Annie Murphy and Catherine O’Hara all returned to present at the 2021 Emmy Awards on Sunday, Sept. 19. The quartet received a standing ovation while giving out the award for Outstanding Writing for A Comedy Series, but soon Dan noticed there was “nothing on the prompter” for them to read.

Eugene asked, “OK, they wouldn’t be doing this on purpose, would they?” Making it clear it was just a bit, Dan responded, “Why would anyone want to embarrass us on national television on purpose?”

Annie accused Eugene’s face of “being weird” and Dan asked if his dad had something to do with the blunder. The 74-year-old actor got defensive, saying, “I didn’t do anything,” but eventually he fessed up: “I may have passed the writers’ room this morning and asked them to lift the dialogue a little bit.” This was his alleged punishment for interfering.

Of course, the group also made time for a Rose family reunion on the red carpet before the Emmys started. While Eugene kept it classic with a black suit, his three co-stars opted for bold colours on the red carpet, with Dan in bright blue, Catherine in salmon and Annie in teal as they posed for pics together.

It might not be the last we see of the Roses, because Dan recently teased that he might be open to making a Schitt’s Creek movie sometime in the future. As he told E! News last fall, “I would love for there to be. I’m not ruling it out.” He said “it’s very flattering” that people want more of the story, “but I would just say generally I think you need to let the good things settle for a minute. Let people finish the show. Let people sort of take a breath.”

Dan, who made his debut at the Met Gala last week, has always been gracious in recognizing his entire team for the show’s success. Last year, he thanked the crew on camera after he accepted four Emmys for the wacky yet endearing comedy series.

“Thank you to my team, every single writer that sat in our writers’ room and offered up traumatizing embarrassing, deeply triggering things so the Rose family could be what they are,” he shared. “Getting to write David Rose, getting to write this show, getting to tell those stories has been the greatest experience of my life.”

The actors have all moved on to separate projects, with Catherine working on Back Home Again and Argylle and Annie coming onboard for season two of Russian Doll. Dan appeared in Happiest Season with Kristen Stewart last year, and dad Eugene signed on for Star-Crossed: The Film and Back Home Again. Other presenters at the 2021 Emmy Awards include Sarah Paulson, Amy Poehler, Hailee Steinfeld, Billy Porter, Seth Rogen and Tracee Ellis Ross.