Shehbaz seeks ‘equal respect’ for all provinces to boost democracy 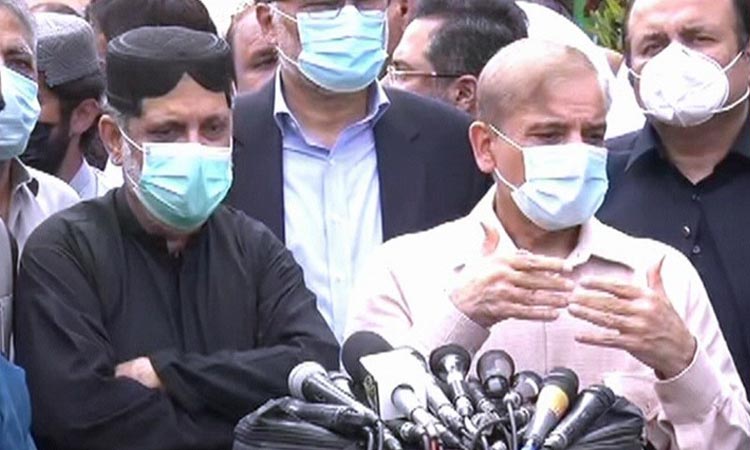 PML-N President Shehbaz Sharif on Sunday called for according ‘equal respect’ to all the provinces, adding that doing so and working together would strengthen the democratic system in the country.

Addressing a press conference in Karachi following a visit to Balochistan National Party (BNP) chief Akhtar Mengal to offer condolences on the demise of his father Ataullah Mengal, Shehbaz said that if Pakistan wishes to see Quaid-e-Azam Mohammad Ali Jinnah’s dream come to fruition, then “we will have to take all provinces forward together economically, legally and politically.” “We need to respect all provinces and deliver their resources to the locals and we need to work together to promote the democratic system,” he added.

Speaking of the long-neglected Balochistan province, he called for an immediate provision of resources to it to end its state of deprivation. “Look at its deprivation […] the water and electricity issue there. I won’t make many political statements but I will only say that if we want to adapt Quaid-i-Azam’s dream then we will have to take all provinces [forward] together economically, socially, legally and politically,” he maintained. “Geographically, Balochistan is Pakistan’s largest province. It may be the smallest population wise, but when you look at its state of deprivation, the distances between places […] there is a water problem there, electricity problem,” he added.

Shehbaz also paid tribute to the deceased veteran politician and BNP founder Sardar Ataullah, mentioning his “services for democracy and struggle for rule of law and the Constitution”. He pointed out the late BNP leader’s role in convincing Baloch politicians to lend their support in abolishing Article 58-2B of the Constitution that had been used to dissolve many democratic governments. Shehbaz said he had a ‘brotherly relation’ with Sardar Akhtar Mengal and PML-N supremo Nawaz Sharif also greatly respected him.

Sardar Akhtar Mengal thanked Shehbaz Sharif and the PML-N on behalf of his family and the party. “Mian Sahib was unwell, still he insisted to visit my village to offer condolence,” Mengal said. “I told him to come to me in Karachi when I will be in the city,” he added.

Shahbaz also met the PML-N councilors who won in the cantonment board elections. During the meeting, Sindh’s political situation and matters pertaining to the party’s affairs in the province were discussed.

Earlier, when Shehbaz Sharif landed at Karachi airport, he was received by local PML-N leaders and workers.