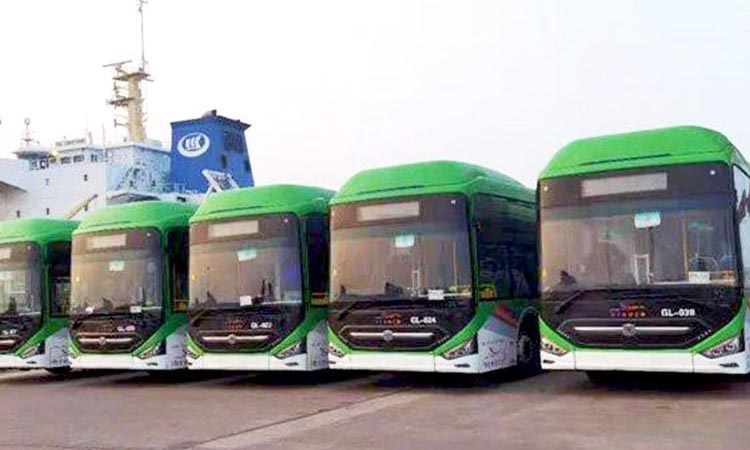 Public transport in Karachi may be closer to getting a much-needed boost as a cargo ship carrying the Green Line Bus Rapid Transit (BRT) project buses has arrived in Karachi.

Cargo ship Feng Shen, loaded with 40 buses, arrive at Karachi port on Sunday. Another consignment of 40 buses will arrive in Pakistan from China in the first week of October.

Addressing a ceremony at the Karachi Port for the delivery of the fleet, Sindh Governor Imran Ismail said “another milestone” had been achieved with the arrival of the buses as part of the Karachi Transformation Plan (KTP) announced by Prime Minister Imran Khan. He appreciated the efforts of the Sindh Infrastructure Development Company Limited (SIDCL) to ensure the completion of the Green Line project within its timeline, according to a statement issued by his office.

The dedicated corridor will serve some of Karachi’s most populated areas, covering Surjani Town to Gurumandir and Numaish Chowrangi in phase 1. “The second consignment of 40 more buses [is] expected to reach in October 2021, and phase 1 of the project would be made operational by the end of November,” the governor said.

One of Karachi’s major public transport projects, the Green Line BRTS was estimated to be completed by the end of 2017, but kept getting new deadlines as Karachiites continued to suffer in the absence of a proper mass transit system. Since the launch of the scheme, the battered roads on either side of the route have turned into a great source of nuisance for commuters and for the shopkeepers doing their businesses.

For his part, federal Minister for Planning, Development and Special Initiatives Asad Umar said the Green Line BRTS was a modern technology-based transport system, comprising a 22-kilometre dedicated corridor aimed at providing easier mobility and catering to the travel needs of 135,000 passengers per day. He said a comprehensive Command and Control Centre had been established for transport projects including Green Line, Orange Line, and others. A bus depot has been built for 80 buses, while 22 bus stations have been constructed.

“For the first time, we are bringing a modern transport system in Karachi,” the federal minister said, regretting that the megacity that gave the most taxes had been deprived of modern transport in the past.

The minister said the commercial operations of the buses would start in the next two months after the installation of relevant software and training of drivers, while the tracks and stations had already been completed.

“This is the first project under the Karachi Transformation Plan, while five other mega-projects are underway,” Umar added.

He revealed that the Executive Committee of National Economic Council (Ecnec) would likely give its final approval to the Karachi Circular Railway (KCR) in its meeting on Monday.