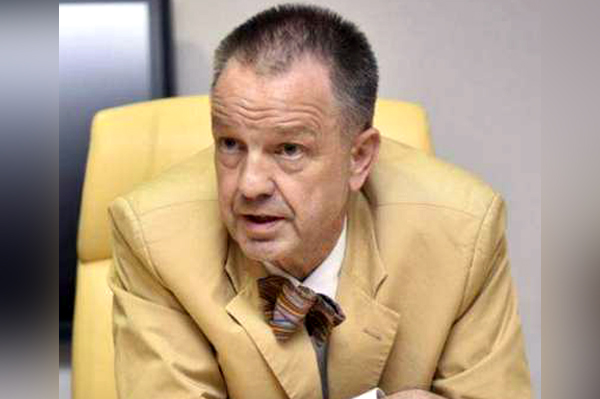 ISLAMABAD: Germany has appreciated the positive role played by Pakistan in bringing about the Doha Process for stability, peace and prosperity in Afghanistan.

In an exclusive interview with Radio Pakistan, German ambassador to Pakistan Bernhard Schlagheck said it has been acknowledged by the United Stated, the world community and Germany also recognizes this very positive role of Pakistan, said a press release issued on Sunday.

The ambassador expressed confidence that Islamabad would continue playing a very constructive role in Afghanistan in future. He said that the government of Pakistan and armed forces were quite engaged in trying to convince Taliban to bring about an inclusive government in Afghanistan, adding that Pakistan was aware of its potential importance and role in the whole of region.

On terrorism, the German Ambassador said the menace emanating from Afghanistan and spreading to region was of very much importance. When asked about the recent visit of German Foreign Minister Heiko Maas to Pakistan, he said the visit was focused on bilateral relations and the evolving regional situation, including Afghanistan.

Schlagheck said Afghanistan was one of the major issues of discussion in meetings of the German Foreign Minister with Pakistani leadership. The German ambassador said Taliban were as much a reality in Afghanistan as well as the precarious humanitarian situation in the country.

He said Germany being a responsible partner of international community was ready to play its role in Afghanistan.
The ambassador said it was very much important that Taliban were willing to discard their old lenses. He said Germany was willing to engage with Afghanistan, however, the question of recognition was not on agenda at the moment.

He said Taliban would be judged by their deeds and actions for recognition. To a question concerning reservations of some Western countries regarding Taliban, he said treatment of women and minorities in Afghanistan and the question of inclusive government in the country were some of the issues the world was looking at.

Regarding the policy of Germany for Afghans who want to settle in that country, he said they have to take care of those Afghans first who are at risk after rendering their services for German interests.

In addition, he said, many vulnerable Afghans including journalists, human rights activists were airlifted to Germany.He said Pakistani government was very helpful in this regard and deserved praise for their facilitation.

Speaking about relations between Pakistan and Germany, Bernhard Schlagheck said Germany and Pakistan had been enjoying friendly and amicable relations since the establishment of their diplomatic relations seventy years ago and there was a scope to further widen these in diverse sectors.

He said both countries have strong bilateral contacts manifested by visit of German ship to Karachi port last week, a German business delegation currently on visit to Karachi and Islamabad and German Foreign Minister’s visit to Pakistan lately.

Similarly, Pakistan’s Foreign Minister Shah Mahmood Qureshi and Chief of Army Staff General Qamar Javed Bajwa visited Germany this year. He said German business persons were looking for trade as well as investment opportunities in the promising market of Pakistan, adding that, the business outlook of Pakistan was outstanding, he remarked.

He told the interviewer that Pakistan and Germany have robust trade relations marked by volume of three billion Euros. There were also intensive people-to-people exchanges and development cooperation between Islamabad and Berlin. Schlagheck said Germany has invested roughly four billion Euros over the years in Pakistan in development aid.

He said aid priority has now been shifted according to requirements of the Pakistani government. Currently, the main focus is on climate change, alternative energy including solar and power production and other areas.

Appreciating the steps taken by the incumbent government to make the country greener, Schlagheck said Islamabad can be a role model in a clean and green approach to nature and environment. In solar energy production, both countries can enhance cooperation further.

Schlagheck said Pakistan was blessed with ample sunshine and can increase the solar share in its alternative energy mix. Regarding cooperation in auto sector, the German ambassador said both sides were exploring and discussing further avenues in this regard. In not too distant future, he said, German car manufacturers might enter into the Pakistani market.

Bernhard said Germany was also cooperating with Pakistan in training the Pakistani youth in learning technical skills. In addition, Germany has been providing vaccines to many developing countries including Pakistan through Covax.

He said German broadcaster Deutsche Welle has been cooperating with Pakistani media organizations, adding that DW has some programs under which Pakistani journalists can be invited to Germany to get further media training.

He said that German airlines were in consultation with Pakistani authorities to start flights to and from Pakistan. However, no decision has been made as yet. The German ambassador said people-to-people contacts were very important in development of bilateral relations.

He said tourism and academic exchanges were important as over 5,000 Pakistani students are studying in German educational institutions, adding, Pakistani students can learn German language free of charge in Germany. Besides, the German universities also offer scholarships for international students at various levels.

He said a thriving Pakistani community of 70,000 comprising traders and skilled people is playing a decent role in the development of the German society. This also plays a bridge between the two countries.