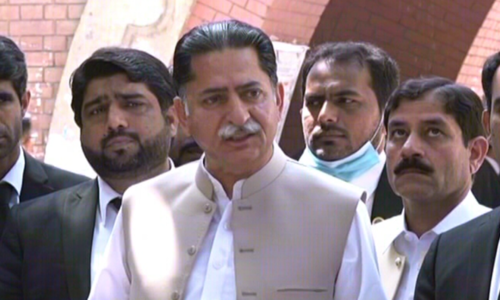 Latif had said that some party leaders were assigned to damage PML-N’s narrative of “respect the vote”. It was, presumably, an indirect reference to Shehbaz Sharif’s policy of reconciliation.

Following the statement, the PML-N president did not attend a couple of party meetings. He demanded to send a notice to Latif for violating party discipline.

On Friday, PML-N secretary general Ahsan Iqbal issued the notice on the instructions of Nawaz Sharif.

“It has come to the notice of the party Quaid that you appeared on a talk show on Sept 14 in which you made certain comments and allegations. That statements were baseless and violative of the party discipline. Quaid is proud of all his colleagues who have stood shoulder to shoulder with him over decades. The party remains united despite the worst conspiracies hatched against it by anti-democratic forces. The recent victory in the cantonment boards’ election is a testament of our unity and steadfastness which enjoys popular support of the people,” states the notice.

It adds that the party gives maximum space to its members to express their opinions within the party in the spirit of true democracy, at the same time the tone and tenor in public discourse no matter whosoever it comes from, which includes discussions in TV talk shows, that violates the very ethics and discipline of the party, is intolerable.

“I am directed by Nawaz Sharif to issue this show-cause notice to you [Latif] and you are called upon to show cause as to why disciplinary action should not be taken against you. Respond to this notice within seven days,” the notice concluded.

Can resign from assembly if Nawaz Sharif tells so

Latif said that a show-cause is a “minor thing”. He can even resign from his National Assembly seat for Nawaz Sharif.

He said his statement was in response to some party leader’s remarks which he deemed against the PML-N’s narrative.

“I have a good relationship with Shehbaz Sharif. But after this notice, I believe, my friendship with the party president will increase,” he said.

Meanwhile, senior party leader Rana Sanaullah said that “anyone on an assignment” could not stay in the party.

He said that Shehbaz Sharif issued a show-cause to any party leader or workers. He made a decision in that regard in consultation with Nawaz Sharif.