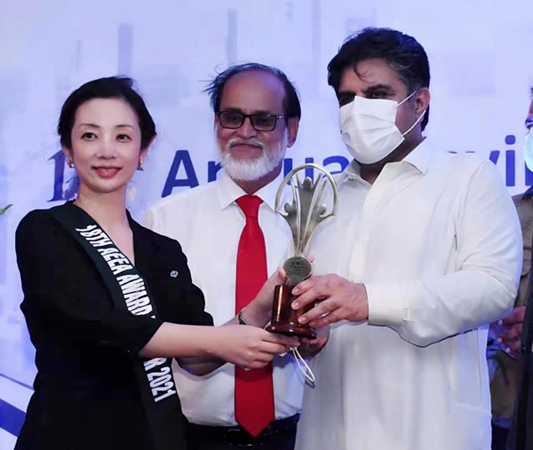 Sino Sindh Resources Private Limited, a subsidiary of Shanghai Electric, has been awarded the 18th Environment Excellence Award 2021 from National Forum of Environment and Health (NFEH).

Yang Jin, Head of Admin and HR of SSRL, received the award on behalf of the company from the Provincial Minister for Local Government and Public Health Engineering Syed Nasir Hussain Shah during an awards ceremony on Thursday night.

Li Jigen, CEO of Sino Sindh Resources Private Limited (SSRL), expressed his pleasure at the award and stressed that his company will continue playing its role in protecting the environment.

“Environment and public health are of utmost importance to us and we will continue to play our role in protecting them,” he said.

Coal-electricity integration project in Block 1 of Thar Coalfield, a “China-Pakistan Economic Corridor” priority implementation project, includes construction and operation of open-pit coal mine with an annual output of 7.8 million tons and 2X660MW supercritical lignite power station. SSRL is the sole operator of the 7.8 Mtpa Open-pit Coal Mine project. The Block 1 open-pit coal field covers an area of 140km2, and the estimated total lignite resource reserve is about 3.8 billion tons, which is No. 1 in Asia and No. 7 in the world and also the largest open-pit coal mine under construction in Pakistan.