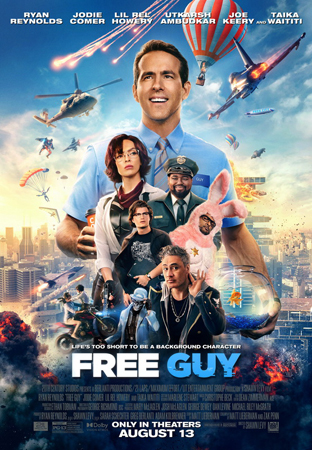 This could have been just a film about a video game in which people are shot, blasted, run over or struck every second.

Well, it is that. However, thanks to its star cast, and the wonderful ease and ability of Reynolds to have a laugh or two at his expense, Free Guy is also so much more.

Shawn Levy also keeps the film lucid and rolling even for those without itchy keyboard fingers. And that’s no mean achievement given the number of people outside and their avatars within a video game intersecting closely with each other, all the talk about code-writing and ‘game-build’ and stolen rights and the battery of neon instructions on screen at long lengths, not to mention the action happening all around them.

Guy is a bank teller in a city called Free City, who is awesomely happy doing, day after day, the same thing – getting out of bed, wishing his goldfish good morning, wearing his blue shirt and khakis with the name tag, having his cereals and coffee and landing up at work. At precisely the same time, at least five times a day, robbers come to loot his bank. On cue, Guy and his buddy called Buddy drop down and let the robbers do their thing.

While all may be perfect with Guy’s world – except the strange way he has of describing tastes, like admiring his coffee as “losing my virginity but in my mouth”; or his ice-cream as “my tongue had a baby with sunrise” – there is one thing missing. He longs for love, a girl of his dreams. When he does spot her, humming a Mariah Carey track, he falls for her – and nothing is the same again, for Guy, the girl Millie and Free City. It’s then that Guy realises that he is nothing but an algorithm inside a video game.

Can people be content leading their lives in preordained roles? Doesn’t everyone deserve the right to live as they want to? What if all of us, the plebians so to speak, decide to mass-strike? Can the world carry on? And even, should video games be only about one thing – shooting?

These are ideas that Free Guy throws up. While the film is not really aiming to change anything, it is a unique way of talking about them. Plus, it doesn’t allow the weight of these matters to drag it down, skipping lightly over them.

Channing Tatum drops in for an absolutely hilarious cameo; Comer pulls off both her avatar as the hot Molotov Girl in leather pants and the video game creator Millie in track bottoms, sharing some lovely romantic scenes with Reynolds and Keery wins hearts as the quiet but brave former creative partner of Millie, Keys.

Funny as he is despite being the film’s villain, Waititi slows down the pace in the second half. The film could have done with some editing to avoid a dragged-out end-of-the-city destruction. But if that end is so painless as to only belong in a fake world, Reynold’s Guy does make you wish it wasn’t so.