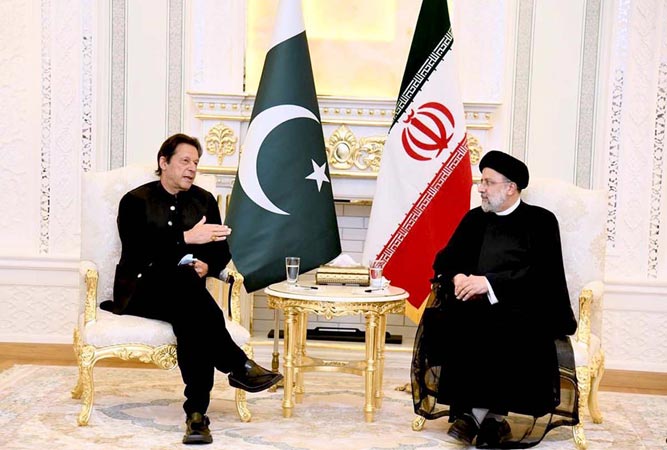 Prime Minister Imran Khan Thursday said it was essential to take urgent steps to improve the security situation in Afghanistan, prevent humanitarian crisis and stabilize the economy. He stressed that there was an opportunity to finally end the conflict and war in Afghanistan after 40 years.

The prime minister expressed these views during a bilateral meeting with Iran President Seyed Ebrahim Raisi on the sidelines of Shanghai Cooperation Organization (SCO) Summit in Dushanbe.

The prime minister underscored Pakistan’s vital interest in a peaceful, stable and prosperous Afghanistan. He said the efforts for stabilization would be reinforced by respect for the rights of all segments of Afghan society and an inclusive political structure. He also stressed the importance of the international community’s engagement with Afghanistan through positive messaging and constructive practical steps.

The prime minister underscored the significance of enhancing structured political ties, fast-tracking trade and economic cooperation by operationalizing Uzbekistan-Pakistan Transit Trade Agreement (UPTTA), enhancing defence and security cooperation, and further increasing collaboration in the fields of education, culture and tourism. He underlined the importance of early finalization of the Preferential Trade Agreement (PTA).

Discussing the situation in Afghanistan, he highlighted Pakistan’s efforts in support of a peaceful, stable and prosperous Afghanistan. He thanked President Mirziyoyev for Uzbekistan’s support to Pakistan’s initiative on engagement of Afghanistan’s immediate neighboring countries for a coordinated approach.

Prime Minister Imran Khan said that Pakistan was committed to further enhancing its relations with Belarus across all fields of mutual interest, including trade, investment, agriculture, industry and defence.

The prime minister said this during the meeting with President of Belarus Alexander Lukashenko.

The two leaders discussed mutual efforts for strengthening of Pakistan-Belarus relations and exchanged views on regional and international issues. Reviewing bilateral relations, the Prime Minister expressed satisfaction at the growing cooperation between the two countries. It was also agreed to enhance bilateral exchanges at the highest parliamentary and political levels. The two leaders exchanged views on the current situation in Afghanistan. The prime minister reiterated Pakistan’s full support to efforts for stabilization of Afghanistan and hoped that the international community will play a positive role in this regard.

Separately, Prime Minister Imran Khan and President of Kazakhstan Kassym-Jomart Tokayev met in the capital of Tajikistan and affirmed the commitment to enhance bilateral relations in diverse fields, particularly trade, investment and transportation links. The prime minister underlined that Pakistan was resolved to comprehensively upgrade engagement with Central Asian countries through its ‘Vision Central Asia’ policy. He particularly emphasized the importance of connectivity and Pakistan’s pivotal position in providing the shortest access route to the sea. The prime minister also highlighted the significance of Trans-Afghan railway project connecting Termez-Mazar-e-Sharif-Kabul-Jalalabad-Peshawar. He also elaborated his vision of socio-economic development and shifting country’s priority from geo-politics to geo-economics.

Meanwhile, Prime Minister Imran Khan invited the business community of Tajikistan to invest their capital in Pakistan, assuring them all out facilitation by his government. Addressing the Pakistan-Tajikistan Joint Business Forum, the prime minister said his government was already on the course of incentivizing and facilitating own business sector through different measures.