Nawaz and Shehbaz ‘are one’: Maryam 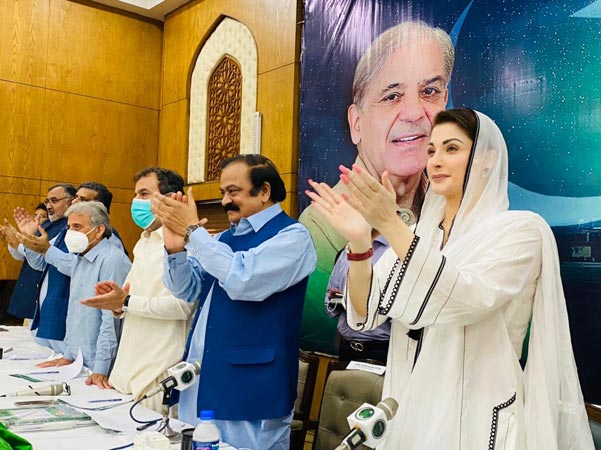 “This is a democratic party. Differences in opinion may exist. This does not mean that one raises questions pertaining to party leadership,” she said, addressing a gathering of workers belonging to the party’s Bahawalpur division. “When it comes to the party leadership, everyone agrees with Nawaz Sharif as well as Shahbaz Sharif,” she said.

The gathering was attended by party secretary-general Ahsan Iqbal and senior members Rana Sanaullah and Khurram Dastagir. Ahsan Iqbal called upon the party to complete its current organisational objectives within 30 days. “Preparations for the election will help us prevent rigging in the future,” he said.

Rana Sanaullah said that the government is “trying to drown out the voices of its political opponents”. “We will not back down now and do not fear this fake accountability drive,” he said. The PML-N stalwart said that cases that were made on “political grounds” are a set back to the country.

Dastagir said that the time has come for the party to strengthen itself from within and called upon all office holders of the party to play their roles for the purpose.

Rana Tanveer Hussain noted that it is the leaders’ “duty to strengthen and save the party”. “This country can no longer be run by this fascist government,” he added.

Riaz Peerzada recalled that when Nawaz Sharif became Punjab’s chief minister in 1985, his first tour was that of Bahawalpur. He expressed the wish that this occur again when the party supremo returns to Pakistan.

While addressing a meeting of party’s DG Khan Division a day earlier, Nawaz Sharif had said that ‘respect the vote’ was not his personal statement but the demand of the entire nation. “The common man is fed up with the conditions these people have brought to Pakistan,” Nawaz had said, adding that people were starving due to unemployment, price hike, inflation which gripped the country due to the incompetent rulers. “Crises situation has been created in the country by bringing the selected. PMLN has a responsibility to fight to get the country out of this situation,” he had said, and directed to mobilise party at the union council level within 30 days.