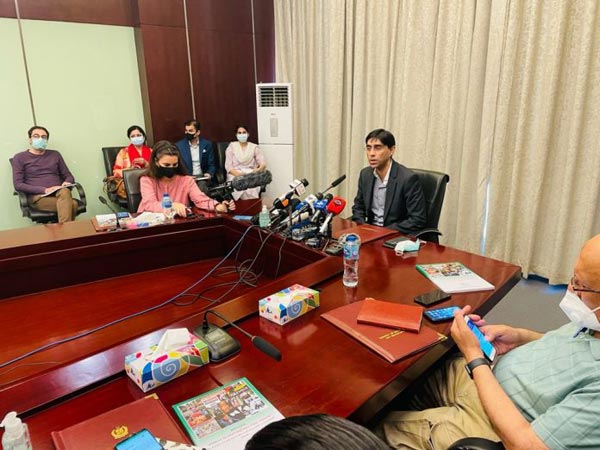 Besides focusing on Afghanistan, he also highlighted Pakistan’s engagement in the region, the role of the international community and Indian human rights violations in the Indian Illegally Occupied Jammu and Kashmir. Dr Moeed apprised them about Pakistan’s efforts in the evacuation of foreign personnel and its willingness to create an air bridge for humanitarian assistance to Afghans.

The NSA said it would be a blunder if the international community abandoned Afghanistan as it did in the past. “This would result in refugee and security crises that will not remain confined to the region,” he added.

He asked the western world to learn lesson from the past and go ahead to support Afghans for bringing long-lasting peace and stability in the war-ravaged country. Exposing India’s role as a spoiler, he said India was in hyper-drive making fictitious stories against Pakistan. Recently Indian media and ex-officials were mocked widely on social media for using a video game ARMA-3 clip to present it as bombardment done by the Pakistani Air Force in Panjsheer valley.

Indian media also used the video of a United States (US) fighter aircraft flying over Wales, United Kingdom to allege Pakistan Air Force’s F-16 fighter jet hovering over Panjsheer valley. The NSA talked about the latest and detailed dossier of Pakistan released earlier this week to highlight India’s human rights violations in IIOJK. He explained how India was brutalizing Kashmiris in IIOJK and referred to credible Indian and international sources that detailed how Indian security forces had used pellet guns for blinding children, staged fake encounters to frame innocents as militants, and engineered enforced disappearances and mass graves.

Dr Moeed said India had befooled the US and North Atlantic Treaty Organization by realising Pakistan as troublesome in Afghanistan but on the contrary, the then Afghan government was itself the cause of the disaster and Afghan National Security Forces did not opt to fight for a corrupt regime. The NSA said there were huge and increasing similarities between Nazi Germany and Hindutva India and warned that if the hostile role of Hindutva-dominated India was ignored by the global community, not only the region but the entire world would have to face the dire consequences.

The world could no longer close its eyes to Modi government’s agenda if it truly cared for stability in a nuclear region. He reiterated Pakistan’s resolve to have a peaceful and stable Afghanistan. He urged the world to engage with Taliban to give peace a chance in Afghanistan after the passage of four decades. “Pakistan has a right to ensure its national security and will do so by engaging with the Taliban,” he added. He also called for an international investigation for using chemical weapons by Indian forces in IIOJK.