‘Gender Alchemy’ is transforming art for the 21st century

* But curators at two California museums have jumped in, organising independent exhibitions that, taken together, reflect what feminist art today looks like 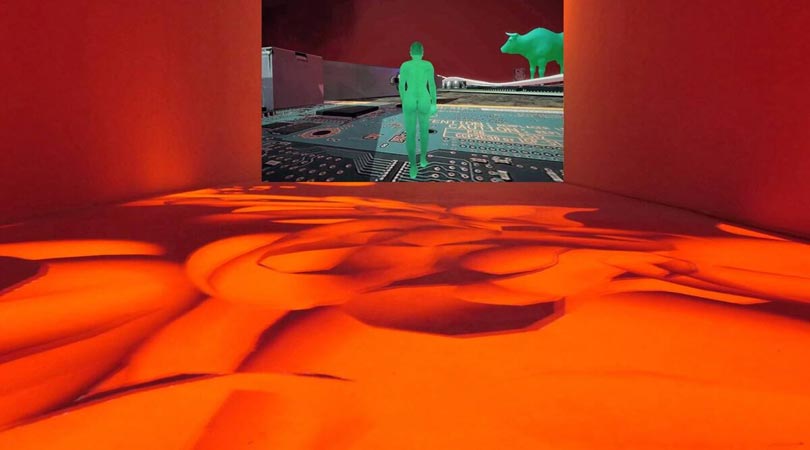 Organising a museum survey of feminist art can be as politically fraught as organising a women’s march, for some of the same reasons. Different women are bound to have different political goals or priorities. There are competing theoretical frameworks, from Marxist feminism, which sees capitalism as the main source of women’s oppression, to the intersectional feminism so prominent today, which highlights the impact of factors such as race and class on women’s lives. And the very notion of what it means to be a woman is fast evolving, with the growing visibility of gender-fluid, nonbinary and transgender populations.

But curators at two California museums have jumped in, organising independent exhibitions that, taken together, reflect what feminist art today looks like – and the most urgent issues it looks at. “I think there has never been a more relevant time to think about a new path forward for society than now, with the pandemic and social reckonings of the last year,” said Apsara DiQuinzio, curator of “New Time: Art and Feminisms in the 21st Century” at the Berkeley Art Museum and Pacific Film Archive through Jan. 30.

The show presents 140 works by 76 artists emphasizing the intersectional, inclusive and global nature of “feminisms,” plural, today. “We see artists in the show focusing on issues such as equity, care, the environment and social justice,” DiQuinzio said.

She began planning her show nearly five years ago in the wake of Hillary Clinton’s bid for the presidency, which was met with a wave of misogyny that still roils. Over the same period, two curators from the Hammer Museum in Los Angeles, Connie Butler and Anne Ellegood, developed a more focused show called “Witch Hunt” that features 15 substantial projects – about half are new commissions – by midcareer artists Butler calls “badass” or “fierce,” adding, “they all deserve major one-person shows of their own.”

The two shows, originally under the auspices of the 2020 Feminist Art Coalition disrupted by the pandemic, share some common ground. “Witch Hunt,” too, is resolutely international, with artists from Mexico, Brazil and Nigeria. “Some of it was us trying to push against a strictly Western, largely white, American perspective on feminism,” Ellegood said. “Some of it was us wanting to see these artists in dialogue together, kind of like when you curate your own fantasy dinner party.” Ellegood has since left the Hammer to run the Institute of Contemporary Art, Los Angeles across town, and now the ICA LA is the second venue for the show.

One artist appears in both “New Time” and “Witch Hunt”: Lara Schnitger, known for organizing her own feminist marches and making sculptures for protesters to carry, such as lingerie mounted on poles that she pointedly calls “slut sticks.” She appears in a section of “New Time” that looks at how female artists use their rage as a tool for social change – a theme in Butler’s catalogue essay as well.

And artists in both shows explore issues of women’s work, with several making visible the so-called “invisible labour” of caregiving. For “Witch Hunt,” Stockholm-based artist Every Ocean Hughes has created a video about a “death doula” who guides the grieving in how to cleanse and handle a corpse. In “New Time,” artist Rose B. Simpson, from the Santa Clara Pueblo in New Mexico, has a disjointed sculpture of herself carrying her young daughter on her shoulders and the two appear physically inseparable.

Building on traditions of the ’70s, feminist artists today are also finding ways to recognize the female artists and activists who have inspired them, combating what Butler – who organized the groundbreaking feminist survey of 2007, “WACK! Art and the Feminist Revolution” – calls “the erasure of women’s history.” But sometimes the homage is quite subtle. Leonor Antunes double-weaves copper wire to make a hanging sculpture in “Witch Hunt” that acknowledges the modernist textile designer Trude Guermonprez. Simone Leigh in the BAMPFA show celebrates the Black feminist scholar Hortense Spillers with a bust covered with sculpted flowers in place of hair, playing on the Latin meaning of “Hortense,” or gardener. In the most dramatic shift from the past, both shows spotlight LGBTQ artists who upset gender hierarchies and binaries in their work. DiQuinzio devotes one section of “New Time” to a theme she calls “Gender Alchemy,” after a sculpture she included by Bay Area trans artist Nicki Green that depicts different stages of personal transformation.

“Gender alchemy was the perfect way to describe how many artists are thinking about gender today, as a shifting, mutating category, not stable or fixed,” DiQuinzio said, calling it “a defining issue for 21st-century feminism.”

The curator included in this section nonbinary artists, cisgender women, transgender women and one man, Kalup Linzy. “Feminism historically has run into really big problems when it has been exclusionary,” DiQuinzio said.

Gender alchemy is not of course a rigid academic or aesthetic category but points to something more exploratory and flexible, even magical: artists transcending the strict male-female binary through fluid or hybrid imagery and, in some cases, seeing their materials as fluid as well. We talked to four creators from “New Time” and “Witch Hunt” who are in this way helping to expand the practice of feminist art.

A performer and visual artist with the charisma of a talk-show host, Vaginal Davis early on took her last name as homage to activist Angela Davis. Her new installation “Unsung Superheroines” in “Witch Hunt” at the ICA LA celebrates dozens of lesser-known women who also influenced her: schoolteachers, punk musicians, underground fashion designers, but most of all her mother, Mary Magdalene Duplantier, who was a Black Creole lesbian.

As a single mother, she raised Davis and her sisters in South Los Angeles with an abundance of resourcefulness, an unerring sense of style – “She was the ultimate femme who did housework in high heels and a little pearl necklace,” said Davis – and full acceptance of her talented daughter, who was born intersex. “Growing up, I was always being prodded and poked by these male doctors, but my mother refused to do surgery,” Davis said.

“Witch Hunt” features a new audio recording Davis made about her mother, along with a series of small portraits of other women “who have affected my life – or infected my life with this joie de vivre and love of books and literature,” Davis said of the paintings. They include “Lesbian Uncle Trash, who was part of my mother’s witch coven lesbian separatist group,” she said, adding that she never knew the real name of the woman, an East Coast heiress who became radicalized. “I’ve tried painting men a few times, but it doesn’t come out so interesting,” she offered.

Many religions incorporate ceremonial objects designed for cisgender, heterosexual men and women. But Nicki Green has been making ritual objects that reflect or celebrate queer and trans bodies, including ceramic sculptures inspired by traditional blue-and-white pottery.

“My partner is Dutch so I’ve spent a lot of time with Dutch Delftware, where the white surface is this ideal space to illustrate,” she said. “It’s always been used as a history recorder in a very ornate way. What I think about is: What would a blue-and-white practice look like if it were being developed and produced explicitly for queer and trans people?”

Her three-sided glazed earthenware object in “New Time” at BAMPFA, titled “Three States of Gender Alchemy”, is one attempt to explore that question. Its three intricately painted scenes depict a person in transition.

The first panel, which she calls “external alchemy,” shows an androgyne harvesting grains and other materials to be transformed physically. Next, “internal alchemy” shows the figure placing fermentation vessels in a pantry. In the third panel, “spiritual alchemy,” the figure is immersed in water, attaining a state of serenity.

The artist said she is drawn to the history and symbolism of alchemy not just for its focus on transformation but also because it has long celebrated “the nonbinary or bi-gendered body as the balanced, harmonious, enlightened being.”

Other recent ceramic sculptures show off the medium’s malleability. “Clay is a trans material to my mind,” Green said. “It does this sort of transformation from liquid slip to plastic, moldable clay to porous but hard to vitreous, super dense, strong stone. It has this fluidity to it.”

In the early days of the internet, before cyberbullying and the doxxing of female gamers, cyberspace seemed to offer a gender-neutral realm, where people were not aggressively divided into male and female. The artwork of Shu Lea Cheang, the Taiwan-born new media and digital arts pioneer, exposes this as a fantasy.

With “Brandon,” in 1998 – the first web artwork acquired by the Guggenheim Museum – she created an online platform and community to explore the legacy of the murdered transgender man Brandon Teena.

In the feature-length sci-fi film “I.K.U.”, from a Japanese word for orgasm, she envisioned a form of sexual data mining in which female humanoid sex workers collected orgasm records on their internal hard drives to benefit an empire named GENOM. In “UKI Virus Rising,” from 2018, a 10-minute video installation in “Witch Hunt” at the Hammer Museum, the characters have been abandoned in a wasteland called e-trashville. The figures are largely androgynous, with no clothes as markers and only the hints of breasts and hips, as they stumble through the digital rubble.

“A lot of my characters are mutating all the time, quite fluid in gender,” Cheang said. The artist, who identifies as cisgender and queer, said that for her video “3x3x6,” which was featured in the 2019 Venice Biennale, she cast an Asian man as Casanova and a queer female performer as the Marquis de Sade.

Best known for photographing members of the LGBTQI communities in South Africa over the last two decades, Zanele Muholi prefers to be called a “visual activist,” instead of “visual artist.” That activism often takes the form of education: running art workshops in Umbumbulu, which during the pandemic became an ad hoc school for children stuck at home.

For Muholi, who identifies as nonbinary, “feminism is not a theory but something I practice.” And taking photographs is a way of insisting on LGBTQI rights in a country that doesn’t do enough to protect them. “This is a time and place where I’ve had to attend funerals almost every month, as people have been subject to hate crimes and brutalized and killed,” Muholi said. “It means everything I do is deeply personal.”

For the series “Brave Beauties,” begun in 2014 and featured recently in a solo show at the Tate Modern, Muholi focused the lens on 19 Black trans women in Cape Town, Johannesburg and other cities, many of whom compete in local gay beauty pageants.

“Most are survivors of different forms of violence, either abuse from the homes where they were born or hate crimes and beatings on the street,” Muholi said. “Some have been expelled from schools.” Instead of focusing on the pain, Muholi creates a space – often at home – for the women to relax, feel beautiful and express themselves, scars and all. The three photographs from “Brave Beauties” in “New Time” at BAMPFA are black-and-white, lending them a historical weight. In one, “Eva Mofokeng I, Parktown, Johannesburg,” a transgender model assumes a classic screen-siren pose blowing a kiss. Muholi has also photographed the women enjoying a day at the public beach, accompanied by a relative who is a police officer. “For too long we’ve been displaced – as Black people, as queer people, as trans people,” Muholi said. “But we don’t always need to protest. Sometimes we just need to have fun and be free.”