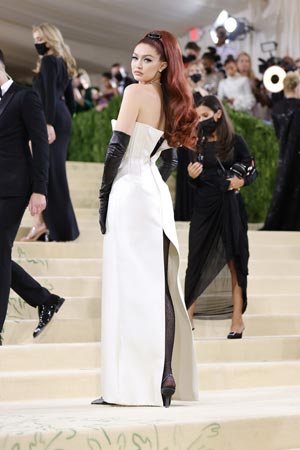 American supermodel Gigi Hadid had a bit of an accident at the steps of the Met Gala 2021 but she saved herself from a major embarrassment.

The fashion icon, 26, almost tripped and fell after a misstep as she was walking the red carpet on Monday but she managed to recover flawless.

The video of the model gracefully recovering from minor hiccup is winning hearts all over the Internet.

After the little misstep, a reporter nearby tells her: “It’s not the Met without having a little trip.”

“It’s better that it happened quickly, and we’re done with it,” responded Hadid.

Hadid slayed the red carpet in a stunning strapless ivory gown with fiery red hair, she gave her casual mom-attire a break to teach her daughter an important lesson.

Speaking to Keke Palmer during the Vogue livestream at fashion’s biggest night, Hadid said she is taking a break from parenting duties for her daughter Khai, whom she shared with singer Zayn Malik.

“She’s 1 next week and I feel like I’ve been on mama duty, I’ve been at the farm with her every day in my sweatpants and our matching messy buns. I feel like tonight I’m showing her what it means to dress up and own it and have balance,” said the model. “I think finding that in your life is when you really feel like you’ve stepped into womanhood,” she added.