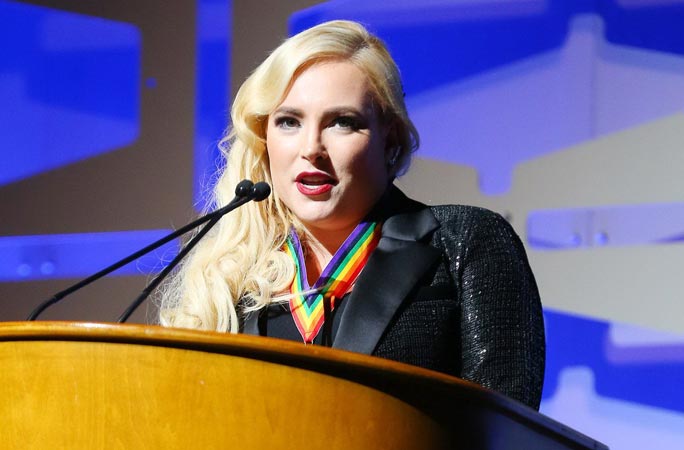 On Monday, Sept. 13, the rapper confirmed to fans that she would not be in attendance for this year’s event, citing the event’s health requirements. “They want you to get vaccinated for the Met, if I get vaccinated it won’t for the Met,” she tweeted. “It’ll be once I feel I’ve done enough research. I’m working on that now. In the meantime, my loves, be safe. Wear the mask with 2 strings that grips your head & face. Not that loose one.”

The “Anaconda” artist went on to claim that her cousin’s friend “became impotent” after getting the vaccine. Soon after Nicki’s tweets went viral, the former co-host of The View replied, “That’s entirely enough internet for today.” To which Nicki fired back, “Eat s–t, you.”

Meghan, the daughter of the late John McCain, then called Nicki’s Tweets ‘irresponsible.’ As she explained, ‘You have an enormous platform and have just spread unimaginable vaccine hesitancy to your fans’

Meghan, the daughter of the late John McCain, then called Nicki’s tweets “irresponsible.” As she explained, “You have an enormous platform and have just spread unimaginable vaccine hesitancy to your fans. Not only is it deeply irresponsible, it is very sad.”

Meghan also added in a later tweet, “I didn’t have a famous rapper losing her mind at me for not being an anti-vaxxer on twitter on my 2021 bingo card, but here we are.”

Earlier in the day, Nicki, who welcomed a son with husband Kenneth Petty welcomed a son in Sept. 2020, shared another reason for not attending the Met.

“I have an infant with no nannies during COVID,” she wrote in a Sept. 13 tweet. “Who mad? Not risking his health to be seen. One yaself.”

The rapper, who also recently revealed she pulled out of the VMAs just days before the show on Sept. 12, also seemed to confirm she recently tested positive for COVID after another fan wrote that he didn’t watch Nicki to “risk catching” COVID-19 at the Met Gala.

“Love u babe,” she wrote in response, adding, “I was prepping for vmas then i shot a video & guess who got COVID? Do u know what it is not to be able to kiss or hold your tiny baby for over a week? A baby who is only used to his mama?”