World must give Taliban time to deliver: Pakistan

* PM says it is a mistake to think that someone from outside will give rights to Afghan women
* Pakistan and US must have a 'normal' relationship, like Washington has with New Delhi 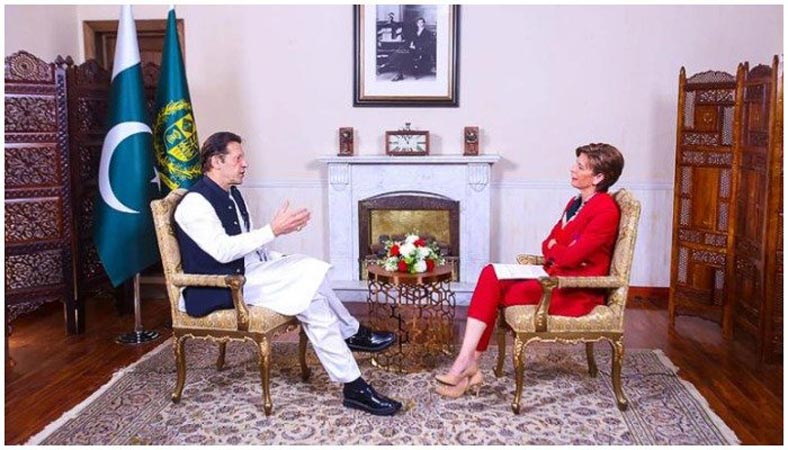 Prime Minister Imran Khan on Wednesday said that as Afghanistan is on historic crossroads, there is a need for the international community to incentivize its people to achieve peace and stability.

“There is another fallacy that Afghanistan can be controlled from outside. There is a history. No puppet government in Afghanistan is supported by the people. It gets discredit amongst the people. So rather than sitting here and sort of thinking that we can control them, we should incentivize them,” Imran Khan said in an interview with CNN.

To a question, the prime minister described the situation in Afghanistan as ‘worrying’. “Afghanistan is on historic crossroads: One if it goes well and we pray that it works in the direction of peace after 40 years in Afghanistan. Taliban hold whole of Afghanistan. And if they can serve now and work for the inclusive government, get all the factions together Afghanistan could have peace after 40 years. But if it goes wrong and which is what we are really worried about it could go to chaos, the biggest humanitarian crisis, huge refugee problem, unstable Afghanistan, and the reason why the US came in was to fight terrorism or the international terrorists – so unstable Afghanistan, refugee crisis, and the possibility of again terrorism from Afghanistan soil,” he remarked.

To critics who say the Taliban will destabilize the country, Imran Khan pointed to the withdrawal of the Soviets in 1989, which resulted in a “bloodbath.” Khan said he was expecting a similar bloodbath to happen after the US forces left. “Our intelligence agencies told us that the Taliban would not be able to take over all of Afghanistan, and if they tried to take Afghanistan militarily, there would be a protracted civil war, which is what we were scared of because we are the ones who would suffer the most,” Khan said. Now, he said, the world should “give them time” to form a legitimate government and make good on their promises.

The prime minister, in response to another question, said no one could predict about the future of Afghanistan. “We can hope and pray that there is peace after 40 years; the Taliban what they have said that they want an inclusive government, they want women rights in their own context. They want human rights, they have given amnesty. So far they clearly want international acceptability.”

Imran Khan said that as the current government in Afghanistan clearly felt that without international air and help, they would not be able to stop this crisis, “we should incentivize them and push them in the right direction.”

To another question, the prime minister viewed, it was a mistake to think that someone from outside will give rights to Afghan women. “Afghan women are strong, give them time. They will get their rights,” he maintained.

The Prime Minister replying to another query, said women should have the ability in a society to fulfill their potential in the life. “You cannot impose women rights from abroad,” he remarked.

The prime minister said the Americans did not understand who the Haqqanis were, adding there was complete ignorance as Haqqani was a Pashtun tribe living in Afghanistan. Forty years ago, when the Afghan Jihad took place, there were five million refugees in Pakistan and amongst them were the Haqqanis who were fighting the Soviets, he observed. The Haqqani leadership was born in the Afghan refugee camps in Pakistan, he recalled. “We were supposed to check which were of the people living in refugees camps were Taliban or not.”

To a question, he said the total budget of Pakistan was $ 50 billion for 220 million people while Americans were spending $300 million dollars a day and in total they spent $2 trillion on the Afghan war.

Responding to another question, Imran said it was a job of the intelligence agencies to meet everyone. The United States Central Intelligence Agency (CIA) would be speaking to Taliban as it was their job, he remarked.

He said the question was whether in the past Pakistan was in a position to take military action against Taliban, adding Pakistani Taliban were attacking the state of Pakistan at one time. There were two suicide attacks on General Pervez Musharraf as there were sympathies with the Taliban within Pakistan, he narrated. He said Benazir Bhutto was assassinated by the Pakistani Taliban because she was considered a collaborator of the United States.

The prime minister said Pakistan’s relationship with the United States during the occupation of Afghanistan was terrible. “The US said we were paying Pakistan and they paid us $ nine billion for civilian aid and $ 11 billion as a military aid and we were like a hired gun.” “In Pakistan the people felt that after joining the US we had bombs going everywhere. Benazir Bhutto was killed because of that and our economy tanked. Our economy lost $ 150 billion. At present we want a relationship with the United States like the relationship it has with India. We do not want one dimensional relationship where they are paying us to fight. We want a normal relationship.”

“The biggest concern are the Afghan refugees as we already have three million refugees in Pakistan. Our country cannot afford more refugees. We have come out of a very difficult economic situation and we cannot take more refugees,” he added.

“The second worry is terrorism. We have three sets of terrorists in Afghanistan using their soil to attack us; ISIS, Pakistani Taliban and Baloch terrorists,” he continued.

Imran said if there was chaos in Afghanistan and if there was no stability “there will be two major problems looming before us. We are the country that is going to suffer the most”.