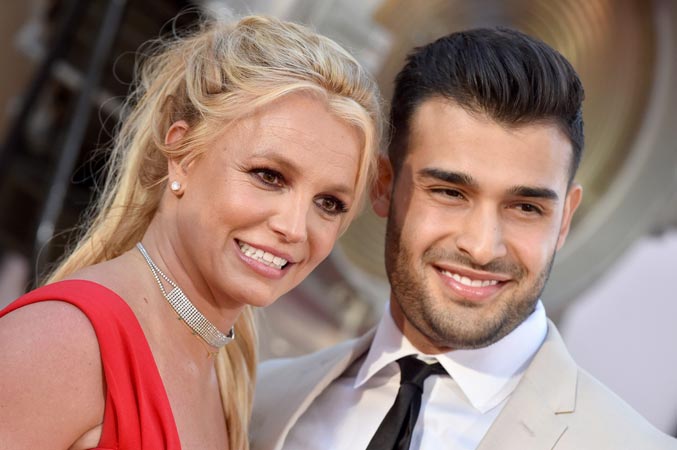 Britney Spears’ fiancé is responding to fans who appear concerned that he wants a piece of the superstar. After the pair announced their engagement on Sunday, Sept. 12, Sam Asghari took to his Instagram Story later that evening to address individuals who were imploring Britney, 39, to sign a prenup before tying the knot.

“Thank you everyone is concerned about The prenup!” Sam, 27, wrote. He added, “Of course we’re getting iron clad prenup to protect my jeep and shoe collection in case she dumps me one day.” The post was clearly a cheeky response to those worried about Britney’s news, particularly in light of her two previous failed marriages. Her 2004 marriage to childhood friend Jason Alexander was annulled and she filed for divorce from Kevin Federline in November 2006.

On Sept. 12, Britney shared footage to Instagram of her ring from Sam and added the caption, “I can’t believe it!” This led Oscar-winning actress Octavia Spencer to bluntly write in the comments section, “Make him sign a prenup.”

The star of The Help was hardly alone in voicing concerned sentiment about the “Piece of Me” singer’s finances. “So happy for you mama but please make sure y’all sign that prenup,” one fan commented. Another individual wrote, “Hmmm. You are about to get your money back, and he proposed.”

Additionally, a different fan posted, “THIS IS A STORY ABOUT A GIRL NAMED PRENUPNEY.” And someone else wrote, “Please make him sign a prenup.”

Britney and Sam, a personal trainer who has had acting roles on Black Monday, Hacks and NCIS, first started dating in 2016 after he starred in her “Slumber Party” music video.

The engagement comes just under a week after the singer’s father, Jamie Spears, submitted his petition to ask a judge whether to end the conservatorship of Britney’s person and estate. Jamie has served as conservator of his daughter’s estate since 2008.