* 'Nick has impacted me in a big way,' shared Priyanka in an interview at the Times Literary Fest 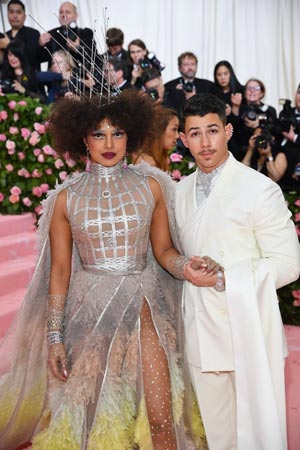 Actress Priyanka Chopra Jonas is head over heels in love with her singer husband Nick Jonas. The global star, who is often seen going gaga over Nick Jonas in her Instagram posts, in an interview has called him a ‘diplomat’ whereas termed herself ‘mirchi’. Priyanka credits Nick for making her a lot more calm in life.

“Nick has impacted me in a big way. I’ve become a lot calmer in life,” shared Priyanka in an interview at the Times Literary Fest. The ‘Quantico’ actress, smilingly shares that earlier ‘she would bite people’s heads off’ when pissed. “If I get pissed off now, I will be a little bit more calm. My husband is a bit more calm and he finds solutions. He’s a diplomat, you know? Whereas, I’m just like a mirchi you know, if I go off, I go off.”

Priyanka Chopra also called Nick Jonas her constant cheerleader and supporter. “The one thing that my marriage has definitely taught me, which I guess I didn’t feel the need to have, which now I can’t live without is, having your, partner give complete credence and credit to the job and the work that I do,” shared the 39 years old.

She further added, “It’s so amazing when I see how Nick accommodates his life or my achievements or my career and where I have to go and what my choices are — how it’s so important to him that I went. And that was something I didn’t realize that I needed — a cheerleader.”

Priyanka called work the second most important thing in her life after ‘love’ and was full of praise for Nick for respecting and appreciating her work. “The one thing that’s most important to me outside of my family is my work. It has stood by me like a rock since I started as 17 years old. And I didn’t realise that I needed my partner to understand the value of how much hard work that I’ve put into building this career on my back. It’s really wonderful to have a partner who appreciates that,” said the actress.

On the work front, the actress has her plate full with multiple projects. Priyanka will be seen in ‘Matrix 4’, a rom com film ‘Text for You’ and an upcoming Amazon Prime Videos spy thriller ‘Citadel’. Priyanka will star in the Hindi film ‘Jee Ley Zaraa’ along with Katrina Kaif and Alia Bhatt. The film will be directed by actor-filmmaker Farhan Akhtar.