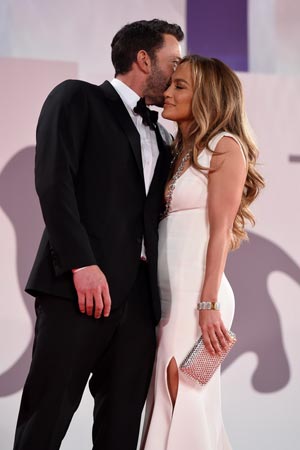 After 18 years, Bennifer is back on the red carpet. Ben Affleck and Jennifer Lopez attended the premiere of his new movie The Last Duel at the Venice International Film Festival on Friday, Sept. 10.

The 52-year-old music superstar unsurprisingly dazzled in a white gown by Georges Hobeika Couture that if we’re being honest, totally exudes big bridal energy. The look, which featured a thigh-high split, ruffled skirt and jewelled neckline, was complemented by silver accessories.

Fans had been excitedly awaiting the big moment. Just the day before, Affleck and Lopez were seen pulling up to the festival in a water taxi, wrapping their arms around each other on the boat and walking hand in hand on the dock. The on-again couple last walked a red carpet together in 2003, when they attended the premiere of their movie Gigli. The two were engaged at the time but confirmed their split the following year.

Fast-forward almost two decades later and Affleck and Lopez have rekindled their romance. From enjoying date nights and vacations together to spending time with their families and celebrating major milestones by each other’s sides, the Oscar winner and the Hustlers star have shown their relationship is back on.

Over the summer, a source close to Lopez told E! News “J.Lo hasn’t been this happy in a long time” and that she and Affleck “are fully committed” to each other. In addition, the insider said the duo are “on the same page” about not needing to get married.

“They have been meshing their lives and families and don’t feel the need to get engaged yet or even tie the knot,” the source continued. “They have both been there and don’t feel it’s necessary. They are both very secure within their relationship and Ben worships her. It’s truly meant to be and everyone around them thinks they are a perfect match.”