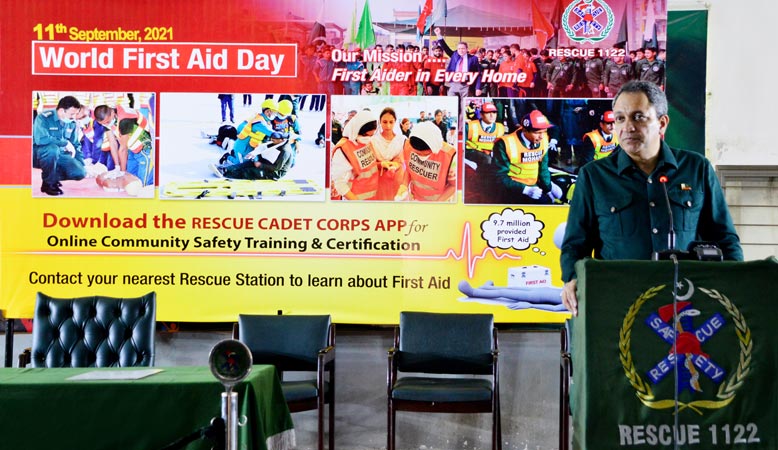 Speaking on this occasion he said today is a very important day as on this day we lost the great leader of Pakistan Quaid I Azam Mohammed Ali Jinnah and this was also 9/11 of Pakistan Death anniversary when nine years ago in 2012 two tragic fire incidents took place in Baldia Town, Karachi, and Bund Road, Lahore Factory, in which 314 people lost their lives on 11th September 2012. This is also a special day for Emergency Services internationally as on this day in New York over 400 fire rescuers and paramedics also lost their lives while trying to save the lives of victims trapped in the Twin Towers of New York. One-minute silence was observed and special prayers were offered to pay tribute to the founder of Pakistan and the victims of these emergencies.

DG emergency services said, “As today is the World First Aid Day and it gives me satisfaction that the emergency service has provided first aid to 9.7 million victims of different emergencies. Furthermore, the service is also committed to train volunteers on first aid to have first aider in every home as immediate first aid can make a real difference in saving lives.”

He added, “On World First Aid Day we should make commitment to learn first aid for saving lives and promoting safety. He appealed to the public to learn lifesaving skills especially cardio pulmonary resuscitation and bleeding control, so that maximum lives could be saved in road traffic crashes and other emergencies.”

Dr Rizwan also said that all citizens can download free rescue cadet corps for online first aid, safety training and certification followed by hands on practice of lifesaving skills at their nearest rescue station. He appreciated ambulance services in all districts for providing timely emergency care to 9.7 million victims and community and safety wing of Rescue Headquarters and all districts for promoting first aid and safety through rescue scouts. Dr Rizwan said that only well-trained community members can significantly contribute to reducing morbidity and mortality rate by providing timely first aid to the victims of emergencies.

In his address to the rescue staffers, the speaker said that during previous tenure of the PTI government, the rescue service was only available in Peshawar and Mardan. He said he had requested the then chief minister Pervez Khattak to extend the service to other districts, especially in Hazara division, over which the first Rescue 1122 office was established in Abbottabad.

Mushtaq Ghani said that whether it is the provision of ambulance service or fire brigade services, Rescue 1122 is available and reaches everywhere in the far-flung and hilly areas of the district, the rescue service is now operational in Havelian and Nathia Gali too and their buildings are also near to completion.