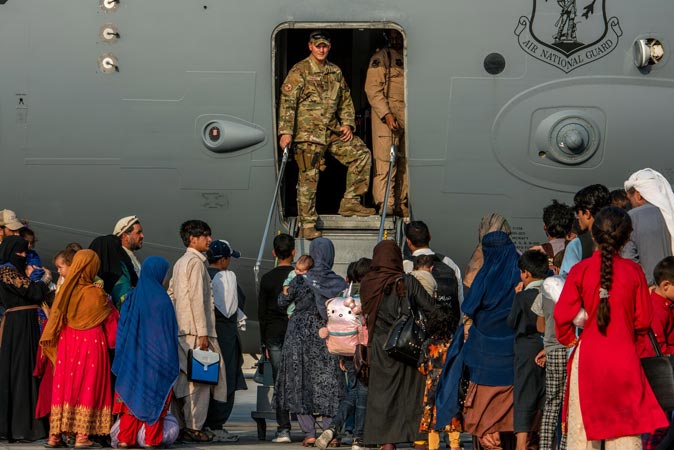 The daily life of unaccompanied Afghan refugee children in Qatar is punctuated by recurring questions, “where are we going?” and “can I have some chips”.

About 200 uprooted young Afghans arrived in Doha aboard flights from Kabul in recent weeks and are being hosted at a reception centre, where they grapple with the trauma of their ordeal. They are now being cared for by Qatar Charity, a humanitarian organisation that has sought to protect and keep them out of the reach of people traffickers. Officials are picking a path for the future of the children who have adopted new routines, playing football, exercising and enjoying arts and crafts.

“It’s very hard to imagine the trauma that they’ve been through,” said an aid worker based in the Middle East who declined to be named.

“All of them are in a state of shock and trauma, similar to what we’ve seen in places like Iraq or Syria with kids who have lived in (Islamic State group) areas.”

The Taliban’s shock takeover rekindled fears among Afghanistan’s people of a return to the hardline rule between 1996 and 2001 which was marked by public executions, floggings and amputations for misdemeanours.

Many fled, including the youngsters, some of whom cannot recall the circumstances of their abrupt departure from their homeland, while others give contradictory accounts of how they came to be in Qatar. According to the UN children’s agency UNICEF, around 300 unaccompanied children were evacuated from Afghanistan to Qatar, Germany and other countries after August 14.

DESPERATE SCRAMBLE: Questions are swirling about how they came to be at Kabul’s airport and then embark on planes bound for Qatar, and drastically different lives, but answers are in short supply.

The US Embassy in Doha did not comment on the specifics of the children’s case. A French police officer who was present at the Kabul airport gates described seeing a woman “desperately throw her baby into the barbed wire towards the French special forces who recovered and handed the child to American medics”.

“The baby was treated and evacuated to Doha. He was really tiny. His mother just disappeared into the crowd,” he added.

The officer witnessed other dramatic scenes. “One man arrived at the gate with three young children who he passed off as his own. They were orphans, he probably used them to get the gate open, but they were also evacuated. Qatar Charity and other agencies are now taking care of the group who are mostly aged between eight and 17 years old, with the youngest housed at a separate facility.